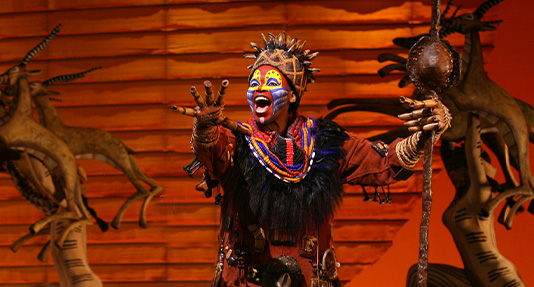 Disney theatrical has a fun video out that takes advantage of some of YouTube’s tagging features to create an in-depth portfolio look at the features of Rafiki’s costume from Disney’s The Lion King Musical.

The character design was created by Julie Taymor as part of her show design that relied heavily on use of masks and puppetry. However, Rafiki is the only character without a mask.

The video plays straight through, but you can also click around on it like an interactive museum display. You may have to click through to watch the video on YouTube to take advantage of the click-to-navigate buttons.

Disney’s The Lion King is the most successful theatrical production of all time grossing over $6.2 billion world wide.

Previously: “Circle of Life” from Disney’s The Lion King in 360 degree video