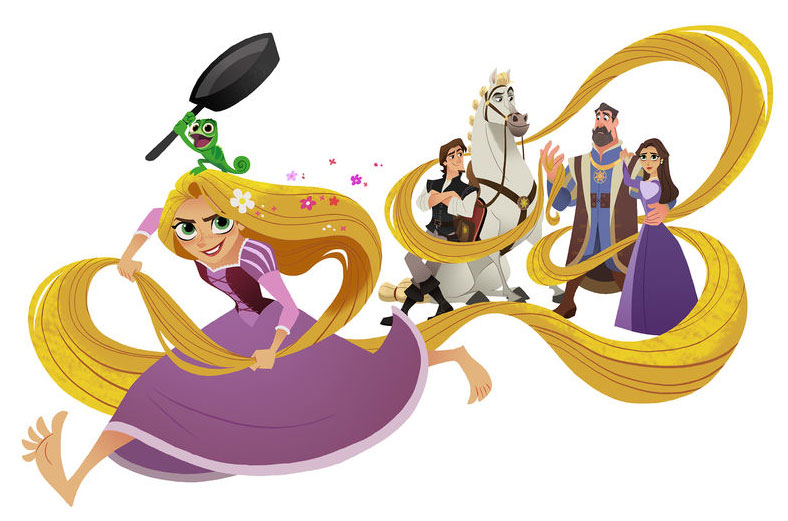 As we covered previously “Tangled: Before Ever After” is set between the events of the feature film and the start of the 2012 short film, “Tangled Ever After.” Premiering in 2017 on Disney Channels around the world, the series unfolds as Rapunzel acquaints herself with her parents, her kingdom and the people of Corona. Along with a new piece of concept art (above), we’re now learning the long list of stars who will lend their voices to the show.

Mandy Moore and Zachary Levi return to voice the two main characters for “Tangled: Before Ever After.” Reprising their roles from the feature film are Jeffrey Tambor (“Transparent”) and Paul F. Tompkins (“Anchorman”) as Big Nose and Shorty, members of the Snuggly Duckling Pub Thugs; and M.C. Gainey (“Lost”) as Captain of the Guards.

That’s quite a list for any show. I”m most excited to see a trio of Broadway veterans with Disney ties joining the cast. Before Eden Espinosa hit the big time on Broadway, she was a performer at Disneyland in many of my favorite shows (Hunchback, Animazement, Pocahontas). Jeremy Jordan performed in “Newsies” and James Monroe Iglehart, of course, owns the great white way as The Genie in Disney’s “Aladdin” musical. 2017 is shaping up to be a great year for Disney animated TV series.