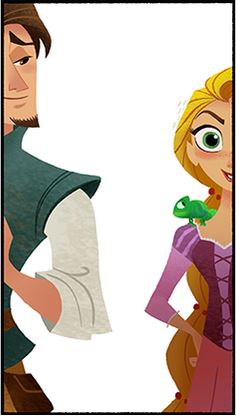 Long rumored to be headed to Broadway or the theme parks as a musical, Disney’s animated hit Rapunzel actually ended up as a musical on the Disney Magic cruise ship. But Disney is not done with future plans for Rapunzel. Disney Television Animation just announced that “Tangled” will becoming to Disney Channel in 2017 as an animated TV series.

Production has begun and Mandy Moore and Zachary Levil will represe their roles as Rapunzel and Flynn Rider. Music will include songs by Alan Menken and Glenn Slater, who wrote the music for the movie. Disney Channel brought in animation veterans Chris Sonnenburg and Shane Prigmore to direct.

“The genius of the original movie was its seamless blending of cinematic adventure, character-driven comedy, and touching emotion. And we are fortunate to have several of the creative talent from that movie on board with this new production,” said Gary Marsh, president and chief creative officer, Disney Channels Worldwide. “With the addition of Chris and Shane as executive producers, we have the perfect team in place to create a series worthy of the original film.”

The animated TV series will happen between the events of the feature film and the short “Tangled Ever After” where the Rapunzel and Eugene were married. It will explore what happens as Rapunzel becomes used to life as a princess. She’ll also be enjoying her new status as an independent young woman.

Returning to the screen will be familiar characters including: Maximus the horse, the Snuggly Duckling Pub thugs, and the chameleon Pascal.

Despite not having an attraction or movie sequel, the characters from Tangled, especially Rapunzel, remain very popular in Disney’s theme parks. Having a dedicated TV show seems like a dream come true for fans of the franchise.