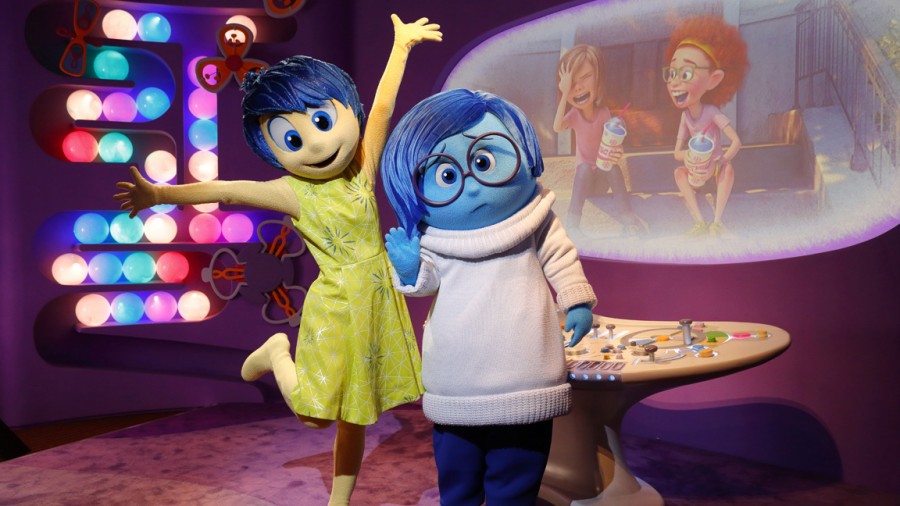 When we saw the amazing walk-around characters of Joy and Sadness at the world premiere of Pixar’s “Inside Out” last year, I think everyone assumed the pair would shortly arrive at Disneyland and Walt Disney World to meet and greet their fans in a photo opportunity. The pair were even brought to the Disney Parks blog event for the movie. However, management at the parks were either unable to make the logistics work or just didn’t care enough to give fans of the movie a chance to meet its emotional stars and we were told that they would likely never appear in the parks.

After much pleading from fans, and an Academy Award for the movie, Disney has finally changed its mind and will open a meet and greet in EPCOT for Joy and Sadness. The pair will movie their headquarters into the heart of Future World to the EPCOT Character Spot.

The original EPCOT Character Spot features meet and greet opportunities with Mickey Mouse, Minnie Mouse and Goofy, with Fastpass+ access. Across the way, in the old Innoventions hall, there is a character spot annex that currently houses a meet and greet with Baymax from Disney’s “Big Hero 6.” This is where Joy and Sadness will be meeting guests.

Like with Baymax meet and greet there will be no fastpass+ option for meeting Joy and Sadness. Expect the emotions to appear beginning in April. Will you add a photo with the emotions from “Inside Out” to your todo list?