Marvel Comics announces a grim grinning addition to their Disney Kingdoms imprint. A new series focused on Disneyland’s Haunted Mansion will bring new marvelous stories to its fans. Written by super fan Joshua Williamson and penned by Jorge Coelho, the Haunted Mansion series will showcase their love for the famous Disneyland property.

The new series will follow the path of Imagineers who gleefully combined laughs and horror with the unique dark humor fans have come to love. The first issue will focus on a young boy named Danny who is drawn to the Haunted Mansion. He wants to find the ghost of a loved one who is trapped inside, but what about the other 998 ghosts? Will they find a way out too? 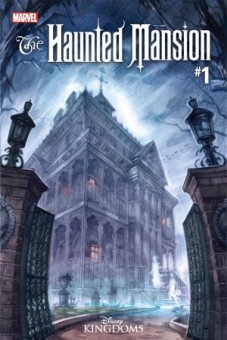 On March 9th, the happy haunts at Marvel will drop Haunted Mansion issue #1, the first of a five-issue Disney Kingdoms limited series. Keep in mind that this series will be a bit more on the horror side than usual. So perhaps judge for yourself before sharing with the younger fans in your household.

As one of the attractions my grandfather worked closely on, Disneyland’s Haunted Mansion is very important to me. So I’ll definitely be checking this series out.