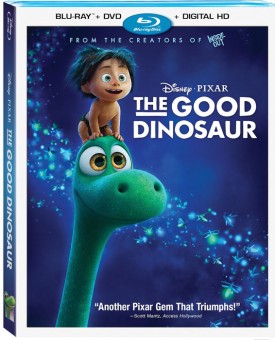 On a planet where dinosaurs evolved un-threatened by that nasty life-ending asteroid, two unlikely pals find their way to a new life through wild country and against unexpected adversaries. Can Arlo and Spot survive to make their way home? That’s the story of Pixar’s latest animated feature – The Good Dinosaur which is now available on Blu-Ray DVD Combo Pack and in digital formats.

For some Pixar’s “The Good Dinosaur” lacked the complexity of its other movies and that was its weakness, but the single-path the story follows can also been seen as its strength. The movie certainly had heart, it had its share of tear jerk moments, and the animation was outstanding (especially the beautiful renderings of nature, which was like a third primary character in the film). I prefer to think of The Good Dinosaur as a simple story woven around a strong emotional core that Pixar’s artists are able to elevate into something touching and wonderful.

Don’t listen to the negative reviews. Is it one of Pixar’s best? No. But it is a wonderful film.

The list of bonus features for the film is as long as it is interesting:

Sanjay’s Super Team – This Academy Award nimated Pixar short is the highlight of the package. In it Sanjay loves the world of cartoons and comics, while his father tries to draw him into his Hindu traditions. Reluctance quickly turns into awe-inspiring adventure as the boy embarks on an amazing journey, returning with a new perspective they can both embrace.

True Lies about Dinosaurs – Thanks to Pixar’s experts we can learn more about what separates the fictional dinosaurs of “The Good Dinosaur“ from what scientists know about real dinosaurs.

Recyclosaurus – Pixar takes creative competition seriously. Maybe a little too seriously. Watch as “The Good Dinosaur” crew competes to see which department can create the best dinosaur ever…using only discarded items from the studio’s “free table.”

The Filmmaker’s Journey – Finding your way from an idea to a film takes a lot of exploration. Director Peter Sohn and his fellow filmmakers talk about the challenging, inspiring, and unexpectedly emotional experience of making “The Good Dinosaur.”

Every Part of the Dinosaur – The filmmakers talk about the special animation challenges of “The Good Dinosaur” – including figuring out how to animate a dinosaur who’s really a boy, and a boy who’s got the spirit of a dog.

Following the T-Rex Trail – Follow the filmmakers as they travel to a working cattle ranch and meet the McKays, a close-knit family whose work ethic, generosity, and stories inspired the T-Rex ranchers of the film.

Hide and Seek – A short animated clip produced to promote “The Good Dinosaur.”

Pixar’s “The Good Dinosaur” is in stock and on sale at Amazon today (save up to 43%!). Your purchase goes a long way to supporting The Disney Blog. Thank you.