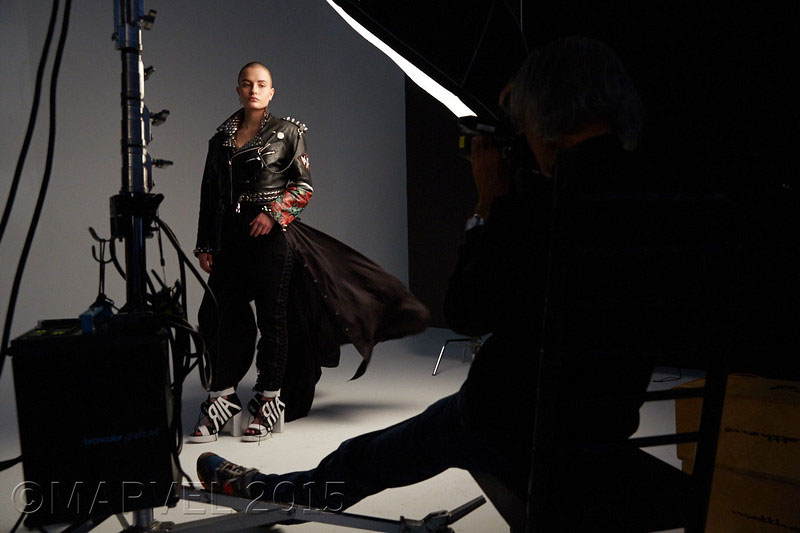 I’ll be honest. I’m not familiar with Garage Magazine, but apparently it’s a biannual print magazine with a digital app that focuses on fashion and contemporary art. I am familiar with Marvel entertainment, whose superhero comics can often rise to the level of art in my book. So I’m not surprised that the two worlds would collide in a new photos shoot that takes famous supermodels and refashions them as Marvel superheroes.

There will be five special edition covers for Garage Magazine’s 10th issue and a special app that will bring those covers to live as 3D digital animations in true comic book form:

Said cover model, Karlie Kloss: “It’s important that young girls have fierce and strong role models to look up to and that’s what this project is really about. These role models come in many forms, from fictional Super Heroes to incredible businesswomen to strong female athletes.”

Included, as part of the feature story about Marvel’s leading female Super Heroes, is Sana Amanat, director of content development and editor at Marvel Comics. “Over the past few years, female Super Heroes have been front and center at Marvel – from Jane Foster taking on the mantle of Thor, to Captain Marvel being celebrated in her own movie. Now, these leading ladies are having an incredible fashion moment with Garage Magazine,” said Sana. “Reinterpreting our Super Heroes through these fashion magazine covers perfectly demonstrates what we believe about our characters – the idea that anyone can express their own unique identity and individualism.”

Garage Magazine was an early adopter of integrating 3D technology into print. By exploring the digital as a new mode of visual communications, each new issue of Garage Magazine and its multidimensional features push the boundaries of fashion, art, and now comic culture.

“Super Heroes meet Supermodels in this unique collaboration with Marvel for the 10th issue of Garage Magazine,” said Charlotte Stockdale, Fashion Director at Garage Magazine. “Merging the powers of style, beauty, technology and the infinite reaches of the human imagination, these Super Heroes of fashion emerge from the pages of Garage in all their 3D swashbuckling glory.”

Go behind the scenes of the photo shoot in this featured video:

To read more from the article and see additional images from the feature story, pick up a copy of GARAGE Magazine on newsstands February 11, 2016 or visit www.garagemag.com. To see more style inspiration from Marvel, follow them on Instagram: @StyledbyMarvel.