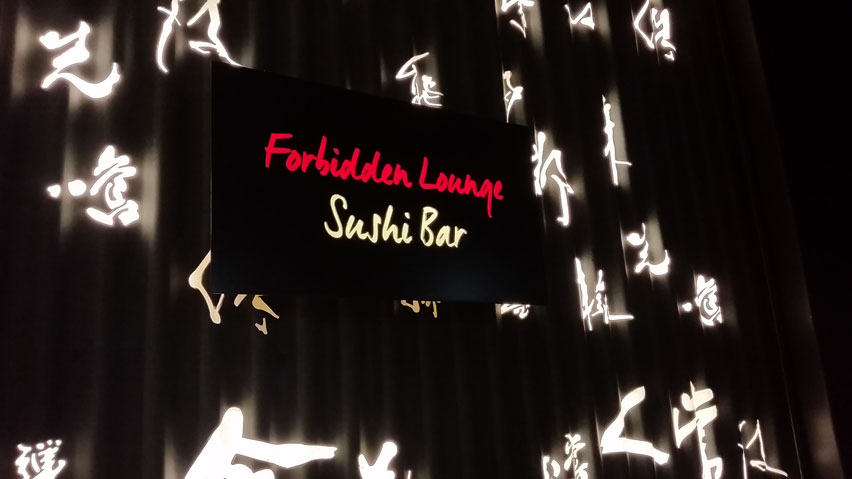 I was recently invited to participate in a sake tasting for local media at the recently opened Morimoto Asia restaurant in Downtown Disney. Dubbed Sake 101, we had the privilege of having in-house Eduardo Dingler, the Corporate Beverage Director & Certified Sake Sommelier for the Morimoto Restaurant Group, who would guide us on our journey into the world of Sake. 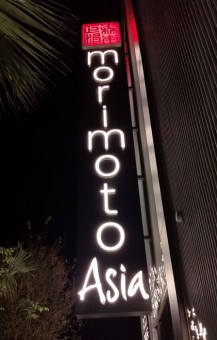 I’ll admit, my sake education level was pretty basic. I knew it was made of rice and was technically brewed in a process closer to beer than wine. But that’s about it. I apparently had some bad habits I needed to unlearn too.

We were greeted warmly and escorted up to the “Forbidden Lounge” level of Morimoto Asia. Not only is there a huge sushi bar and lounge, you can also enjoy dining on an outdoor deck or in the private room, which is where we were seated.

Dingler walked the group through the basics of Sake. There are typically five ingredients used to make Sake ( Rice, Water (softer water makes smoother sake, harder water makes crisper sake), Yeast, Koji (a mold that converts the rice into sugar), alcohol, and sometimes lactic acid). You need to take Morimoto Asia’s Sake 101 to get all the details, but suffice it to say that like wine, the source of the water, the quality of the rice and how its prepared makes a big differences as to quality and taste of the finished Sake product. Rice that is more finely milled makes higher quality sake.

Here’s a tip I learned, most of the finer sake is meant to be consumed cold. When you heat up the better sake blends, all you’re doing is masking the things that make it so tasty. So feel free to heat up your sake, but keep it to the cheaper daiginjo quality. You’ll save money and won’t notice the difference. I’ll be consuming nearly all my sake cold going forward. Also sake does go bad, so drink it within a few weeks of opening. 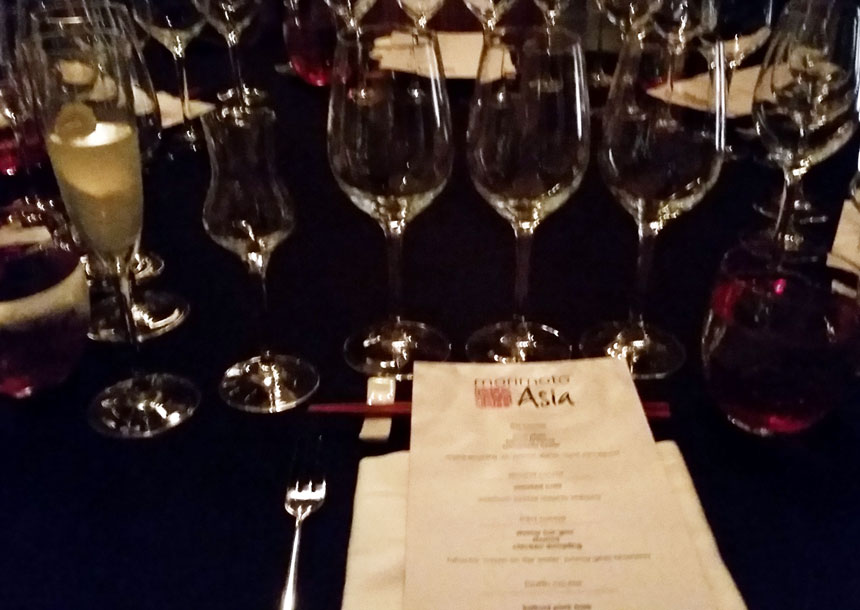 During our Sake 101 course we enjoyed four varieties of sake along with some delicious food pairings. Our sake was served in wine glasses to help us better understand how the tastes and aromas play together. I’ll be trying that at home too.

Up first was a Sake Cocktail (left in photo above) that mixed plum wine and lemon. The result was something similar to Limoncello for you Italians out there. It reminded me of the amazing Sake Martini at California Grill. I have to get back and try another one of those soon. 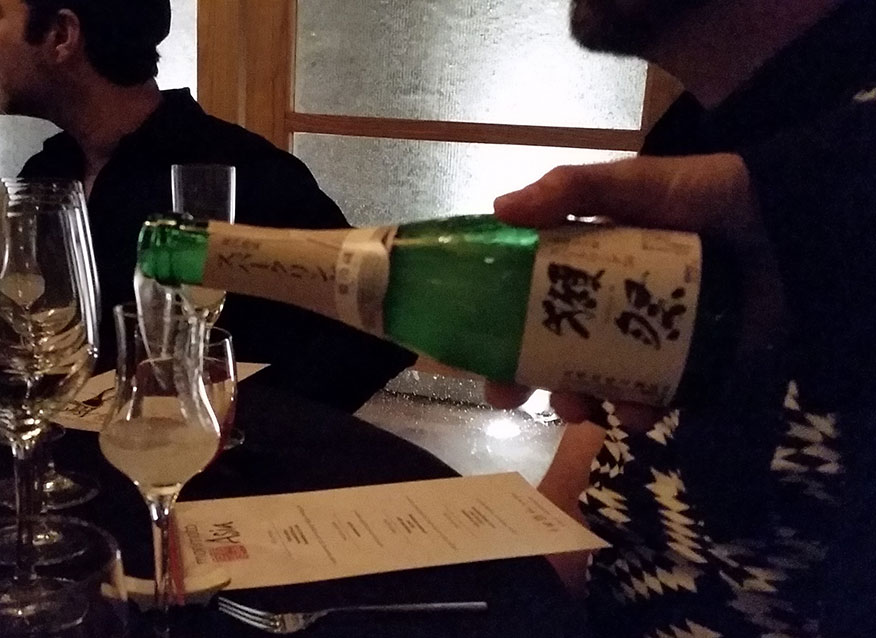 To pair with our first course we were served a sparkling sake, “dassai sparkling ’50’ junmai daiginjo nigori yamaguchi.” Like wine the names contain information about both the quality of the drink and the location its from. In this case Yamaguchi is a southern region close to the sea. The cloudy appearance comes from having the pressings filtered back in and that adds a nice velvety texture. It had a very fruity and melony aroma and a very light taste. For us it was served in an aperitif glass and paired perfectly with a trio of seafood & oyster inspired tastes. The hamachi taco was a particular standout. 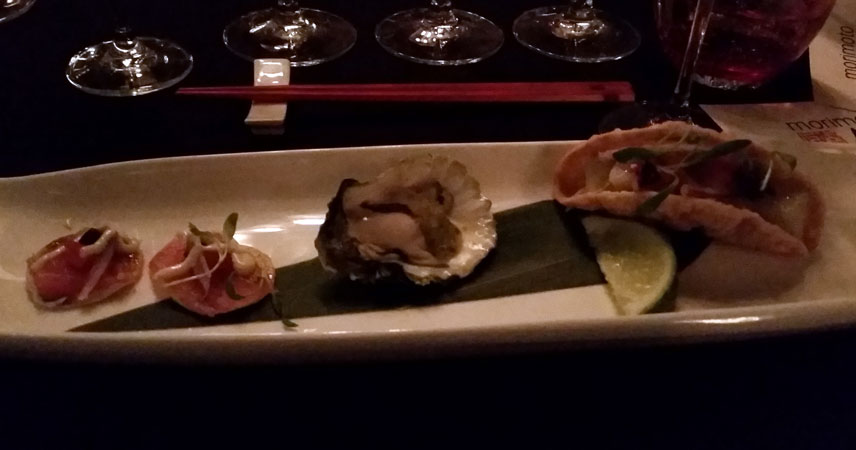 The second course was assorted sushi and was served with “Morimoto junmai daiginjo ishikawa.” Ishikawa is a brewery in Tokyo and Morimoto has partnered with them to create this exclusive sake. This was very dry, a little floral, and similar to a good Chardonnay. The pairing with sushimi and sushi was excellent. 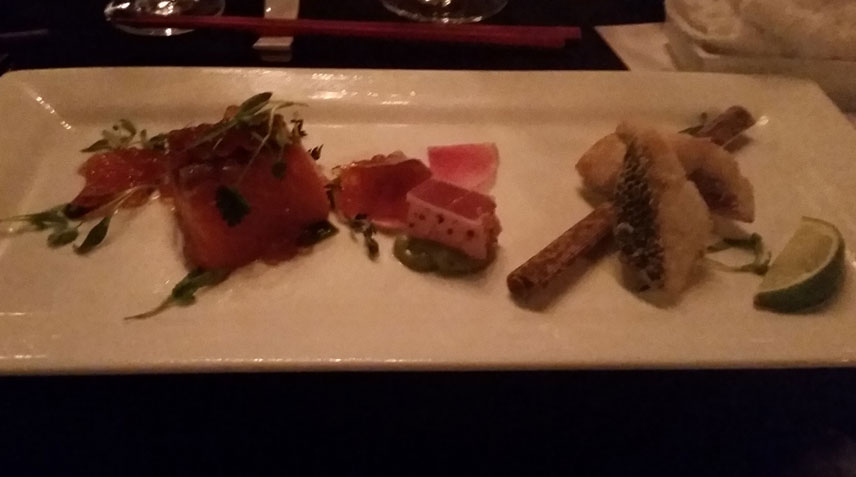 For the third course we were treated to “fukucho ‘moon on the water’ junmai ginjo hiroshima.” Owned by Miho Imada, one of the few female Sake brewers in Japan, this variety had strong floral notes, a lot of minerality and packed a bit more of a punch. It was paired with a dim sum trio of shrimp and pork shumai, shrimp har-gao, and chicken dumpling. 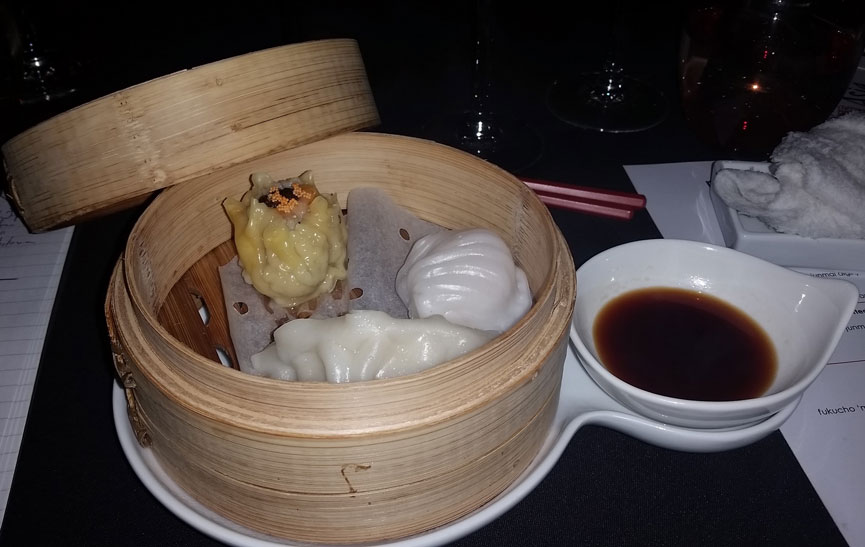 The fourth and final course of Sake 101 was centered around “kikusui ‘karakuchi’ honjozo niigata” and was paired with a trio of little bits of heaven in the form of pork bao, chicken boa, and rock shrimp tempura. This is brewed in the north of Japan and is a refreshing, dry sake. The perfect way to end the tasting. 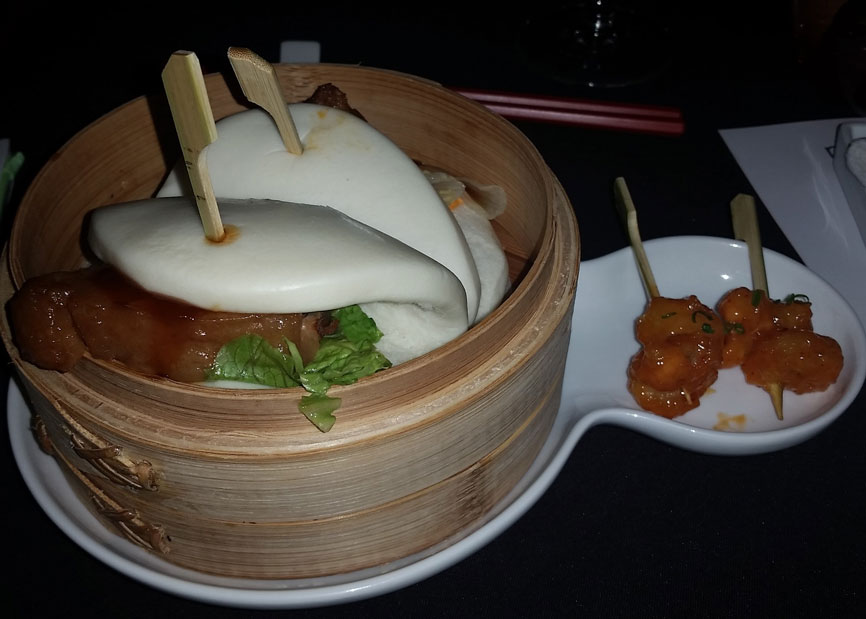 Everything that was placed before us was delicious and quickly devoured. The sake pairings were very instructional, although our instructor did encourage us to try some different pairings too. After the evening, I feel much better prepared to order sake correctly and even make a pairing with the meals I cook at home.

Although there are no Sake 101 classes currently listed on the schedule for Morimoto Asia, it can be arranged as part of your group event.

Previously: Our report on the grand opening of Morimoto Asia.