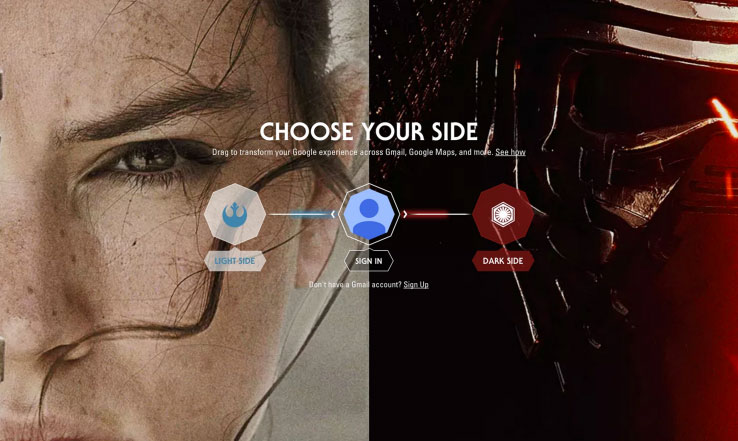 A new promotion between Disney and Google encourages Star Wars fans to choose the dark side or the light to customize their Google experience. Soon there will be a Virtual Reality App to use within Google Cardboard Virtual Reality that will include new immersive experiences. All this to celebrate Lucasfilm’s much-anticipated “Star Wars: The Force Awakens.”

Awaken the Force Within global program starts today and fans logging onto google.com/starwars can make a choice to be on the Dark Side or the Light Side for the upcoming Star Wars: The Force Awakens. Their favorite Google apps will transform to reflect the path they choose. Special experiences have been developed for Android Wear Watches, Google Calendar, Chrome, Chromecast, Gmail, Google Maps, Google Now, Waze and YouTube with added features for fans to discover on their Inbox by Gmail, Google Translate and Google Search.

Coming on December 2 is a new virtual reality experience developed along with Google and Verizon. This will feature the first-of-its-kind serialized Google Cardboard Virtual Reality (VR) experience that combines a compelling story and exclusive, never-seen-before content, which ties directly into the opening of Star Wars: The Force Awakens, with the very latest cutting-edge Virtual Reality technology.

I was recently able to experiment with the Google Cardboard VR experience. It’s quite genius in its simplicity. Once you have the cardboard device, all you need is your own smart phone with the correct app on it.

The Google Cardboard Virtual Reality experience launches via the official Star Wars app and is available on both Android and iOS devices.