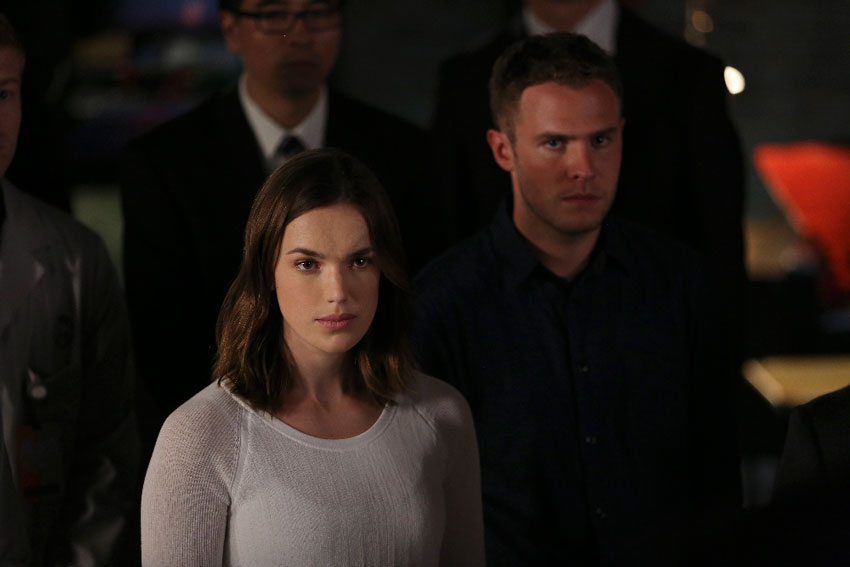 This week’s episode of Marvel’s Agents S.H.I.E.L.D. started with a conversation between Ward and Malick. They’re still sizing each other up and it seems that Malick has his own agenda, which doesn’t include Ward. He leaves Ward in the hands of his guards but Ward quickly over powers them. Ward gets the guards to tell him the location of Strucker’s secret vault. Then, he heads off to Germany to find it.

Back at S.H.I.E.L.D., the team is giving Andrew to the ATCU. Coulson uses this as an opportunity to invite Roz to see the S.H.I.E.L.D. base, a decision Mack is not happy with. Coulson responds to Mack’s hesitations with Operation: Spotlight. While Coulson has Roz distracted at the base, the rest of his team (except for Fitz-Simmons who are still working on the monolith portal) are going to infiltrate the ATCU to find out what they are really up to.

Bobbi discovers a bunch of fish oils pills and directions for every ATCU worker to take them. They aren’t looking to cure the Inhumans. They’re creating more. When Coulson learns this, he confronts Roz who is dumbfounded. She tells him that she reports to Malick who, Coulson reveals, used to be on the World Council (Fun Fact: Powers Boothe, who plays Malick, was in fact, one of the World Council members in The Avengers). They figure out that he is Hydra and Roz calls in her right hand man, Banks, to bring Bobbi and Hunter to safety.

Meanwhile, Fitz-Simmons are coming through old books to find a connection between the symbols they’re finding. They also finally talk about the elephant in the room as Simmons confesses to being in love with both Will and Fitz. They share a kiss but Fitz knows that he can’t compete with a hero like Will. As he walks out of the room, Simmons discovers the connection between the symbols.

As they show the rest of the team their discovery, that these symbols have changed and evolved over the centuries to become the current Hydra symbol, Ward breaks into Strucker’s vault. Malick is there and impressed that Ward made it so far. He decides to tell Ward the true origins of Hydra as he pulls out a smaller monolith portal.

Hydra has been around much longer than World War II. Centuries ago, they discovered the first Inhuman and threw it into the monolith portal and ever since they have been sending human sacrifices to it. The Inhuman, is the entity that was hunting Will and Simmons during her 4,722 hours on the planet.

Everything is starting to come together and become clear for the team. Their next goal is to take down Ward, but we’ll have to wait two weeks to see it. Next Tuesday is the second part of the Season Finale of Dancing with the Stars. Agents of S.H.I.E.L.D. will be back on December 2.

I loved this episode, especially seeing S.H.I.E.L.D. doing what they do best; being super spys. What did you think?