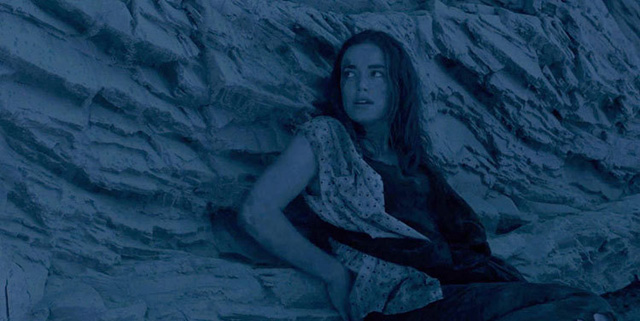 This week we rolled back the clock 4,722 hours, or six months, on Marvel’s Agents of SHIELD and followed Simmons through the Monolith’s portal to a strange, sun-less planet.

Simmons spends the first few days trying to find food and water. Eventually, she stumbles upon Will, a NASA astronaut who volunteered to be a part of mission to explore the planet. He’s been stranded for 14 years. His teammates eventually succumbed to an evil entity from the planet, went crazy and killed themselves.

Simmons figures out that they can predict where the portal will open next so they make a plan to be there when it opens. Unfortunately, the plan fails and Simmons and Will come to grips with the fact that they are probably stuck on the planet forever. They then decide to make the best of it and grow closer together.

Eventually, the figure out that the planet does, in fact, have a sun that only appears every 18 years. They make plans to watch it together but see Fitz’s flare instead.

They race to its point of origin but the entity comes to attack. Will distracts it and allows Simmons to get away.

At this point, we find that Simmons has been telling this whole story to Fitz. Fitz immediately gets up and runs to the lab. Simmons follows him and Fitz tells her that he will help rescue Will.

On the one hand, this was a great episode. It really showcased what Elizabeth Henstridge, who plays Simmons, can do as an actress. She was able to hold the episode together on her own. On the other hand because the only time the rest of the team was seen was on a video on Simmons’ phone, it completely stopped the momentum that the other story arcs had going.

previousWhen Lucasfilm makes the next Indiana Jones movie, who will be in lead role?
nextOne of EPCOT’s original cast members retiring from Voices of Liberty