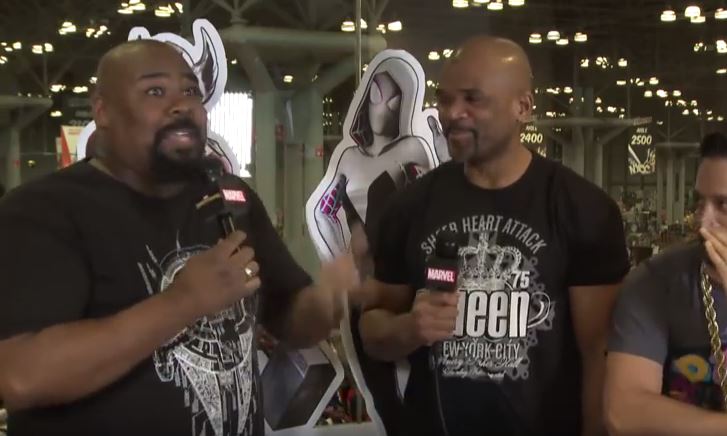 The amazing James Monroe Iglehart is a man of many talents. He steals the show every night as the tap dancing, wish granting, improvising, magical The Genie in Disney on Broadway’s Aladdin, but did you know he also has a passion for the rare lexiconic art of the rap battle.

Now don’t tune out yet because this story has a Disney twist. Iglehart is also a huge Disney nerd and shares a passion for comics as well. So no one was surprised when he showed up at the New York Comic-Con.

While chatting with the folks at the Marvel booth, he dropped this epic rap about the ultimate villain Ultron

But it doesn’t stop there. DMC ( aka Darryl Makes Comics aka Darryl McDaniels from the legendary pioneers of hip hop — Run-D.M.C.) stopped by the booth as well and, after seeing Iglehart’s Ultron rap, challenged him to a rap battle. Oh, it’s on!

I love that old school rap style, add to it the ability to improvise amazing lyrics, and this was an awesome display of their talents. It’s clear Iglehart was starstruck, but he did a standup job. Don’t you agree?

If someone at Disney isn’t working on a way to capitalize on Iglehart’s many talents, I’d be very disappointed.