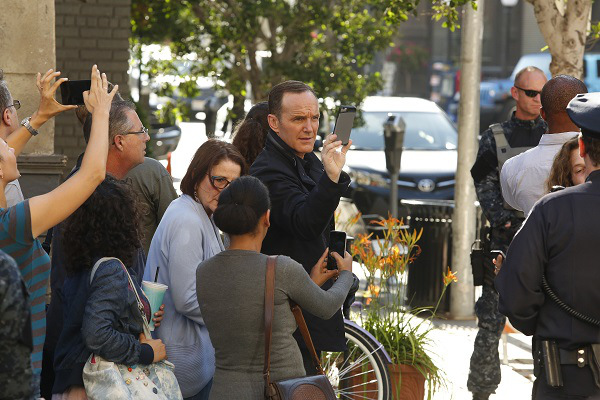 In “Laws of Nature” the season starts with a man named Joey who has just become an Inhuman who has the ability to melt metal. He is then attacked by a mysterious group of people looking for Inhumans.

Fortunately, the agent formally known as Skye (and now known as Daisy Johnson) and her team catch up and rescue Joey. They take him back to a new and improved Bus where he is then brought up to speed with what is happening. The Terrigen in the fish oil pills he took altered his DNA because he had Kree blood in him.

He struggles with accepting his new life so Daisy seeks help from Lincoln. Lincoln is now working in a hospital and wants nothing to do with helping S.H.I.E.L.D. or encouraging anyone to become in Inhuman. During their argument they are attacked by another Inhuman, Lash.

Meanwhile, Coulson and Hunter have tracked down Rosalind Price, the lady in charge of the mysterious other group hunting Inhumans. They end up in a stand off in the subway when they both learn of Lash’s attacks in the hospital. Lash is not working for either of them, so there is a third party hunting Inhumans.

This whole time, Fitz has been in Morocco trying to uncover the mystery of the Kree Monolith and what happened to Simmons. He discovers a scroll that is suppose to hold the answers he’s looking for but all is has is the Hebrew word for “death.”

The episode ends with an announcement from President Ellis. He begins by reminding everyone that these alien attacks are becoming more frequent and more violent. He makes reference to The Avengers, Thor: The Dark World and Avengers: Age of Ultron to make his case. And, because S.H.I.E.L.D. couldn’t protect them (here he references Captain America: Winter Soldier), he has established a new organization that will hunt down these alien threats; the Advanced Threat Containment Unit (ATCU). Coulson figures out that this is the same group being led by Price.

I loved this moment because, not only does it, once again, connect the show back to the movies we’ve already seen (that’s not even mentioning the Ant-Man reference from Coulson elsewhere in the episode), it is setting the stage for Captain America: Civil War. We are beginning to see the public turning against the Avengers and their lack of accountability.

Our end of episode tag reunites us with Simmons who seems to have been teleported through the Monolith to another planet.

Conspicuously absent was Agent May who, according to Coulson, went on vacation with her ex-husband and not returned.