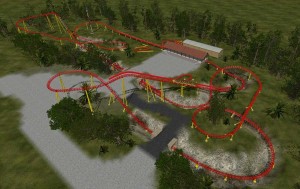 I thought I was on the ball with Pixar Toy Story Land expansion attempt at mapping where the various attractions will be located at Disney’s Hollywood Studios. However, one fan has me beat. He’s already built a virtual ride-through of the Slinky Dog Roller Coaster using the “No Limits 2” ride engine.

Remember this isn’t official, just a fan take based on the concept art. But strap yourself in and enjoy the ride:

Obviously, the finished Disney version will have more themeing, but if that fan-created version is anything like the official roller coaster, we’re in for a real fun family-friend addition to Disney’s Hollywood Studios.