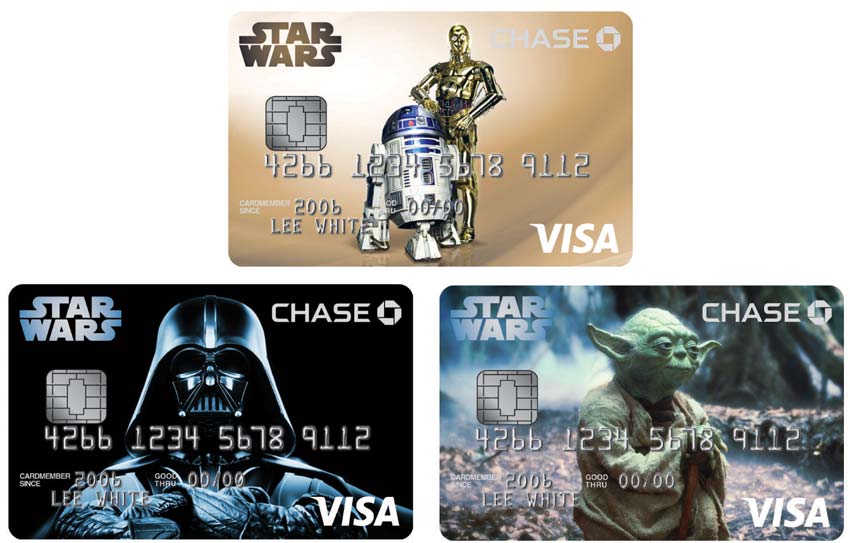 Star Wars fans lined up at D23 Expo for a chance to be first to get the newest credit cards from a Galaxy Far, Far Away…. This collaboration between The Walt Disney Company and Chase bank puts The Force in your wallet with the introduction of three exclusive Star Wars designs to the Disney Visa Credit Card family, accompanied by exciting, new and exclusive Star Wars perks for all Disney Visa Credit cardmembers.

Cardmembers will be able to carry the new double-sided card designs featuring Darth Vader, Yoda or R2-D2 with C-3PO (designs depicted above subject to change) In addition, all Disney Visa Credit cardmembers can have access to the exclusive Star Wars Imperial Meet ‘N’ Greet, featuring the Supreme Commander of Imperial Forces, Darth Vader, at private cardmember locations at the Disneyland Resort and Walt Disney World Resort. The Star Wars Imperial Meet ‘N’ Greet experience opens at the Disneyland Resort in fall 2015 and at Walt Disney World Resort in early 2016.

“Star Wars is one of the most iconic franchises in movie history, and we are thrilled to bring a piece of this classic to our cardmembers,” says B.J. Mahoney, general manager, Chase Card Services. “The unique card designs and exclusive experiences help Disney and Star Wars fans celebrate this epic film series in a whole new way.”

All Disney Visa cardmembers can also enjoy savings on select Star Wars merchandise purchases at Disney Store and select locations at Walt Disney World and the Disneyland Resorts and can have the opportunity to take advantage of upcoming Star Wars-related limited-time offers.

“Since first launching the Disney Visa Credit Cards with Chase in 2003, our priority has been providing a meaningful rewards program while also looking for new ways to bring excitement and fun to every aspect of the Disney experience,” says Priya Girishankar, Vice President, CRM & GM Consumer Financial Services. “We are delighted to add Star Wars Characters to our card designs and offer enticing perks tailored for the Star Wars and Disney fan alike.”

All Disney Visa Cards offer access to amazing perks 365 days-a-year when visiting Walt Disney World and Disneyland, including Character Meet ‘N’ Greets at private cardmember locations and special savings at Disney’s U.S. Theme Parks, Disney Store and DisneyStore.com. In addition to the new credit card designs, cardmembers can also choose from various already available designs featuring some of the most beloved Disney Characters. It as also announced that the Chase Lounge will be returning for this year’s Food and Wine festival at EPCOT.