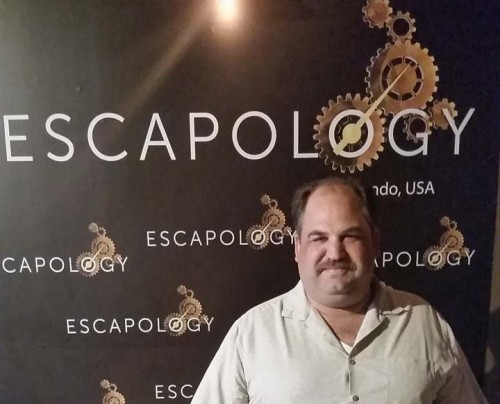 Escape Rooms are the latest thing to hit Orlando. You and a few friends are co-workers are locked in a room and you have to use teamwork and mental acuity to escape within the time given (usually 1 hour).

To be 100% honest, I wasn’t all that thrilled with the idea of partaking in an escape room scenario. But the opportunity arose to attend Escapology Orlando and I pulled up my big boy socks and decided to enjoy myself.

When you go to Escapology you find yourself down in the attractions area between SeaWorld and Walt Disney World. It is a basic storefront in a mostly abandoned strip mall, which gives it an eerie feeling before you even set foot inside. But ignore that feeling and go in anway.

Once you are inside, you step into a very brown, but comforting space with a clockwork steampunk feel. I felt immediately at ease in the space. 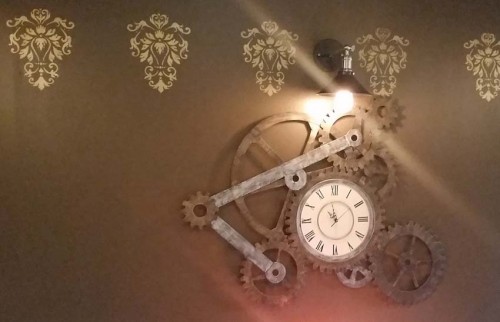 In the back of the room was a leaderboard where you could see how fast other groups completed their games and how many hints were required to assist. Apparently there are escape room enthusiasts who come and try and improve their times often competing against groups of their friends. I can totally see the thrill of solving a room becoming addictive. 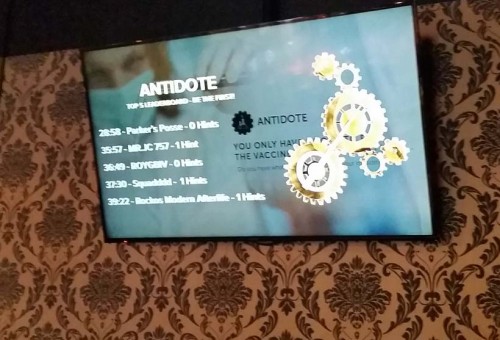 Various families and groups were in the lounge having either just finished their escape or waiting for their scenario to begin. I was surprised by how many groups the small storefront was able to move through without it seeming crowded at all. The set up was really well thought out.

Our group was soon next on the clock. The process starts with an orientation video, which was very well produced and also designed to make you feel at ease. You also have a human ‘game master’ who helps answer any additional questions you have both before and during the game.

Then before your know it, you’re in the game room and the door is locked. Now it’s up to you to work together and decipher the clues that will lead to your freedom.

I won’t go into too much detail about the game we played, which was Antidote, but I will say it was challenging, but also totally conquerable. We had a lot of fun throughout and when we did get stuck on a clue or were heading down a dead end, the game master was able to step in and point us in the right direction without having to really give anything away.

After the game there was a debrief with your teammates and the game master. This is a good time to go over what you learned, what you could have done better, and to take a victory picture in front of the Escapology Banner for social media mastery. Your game master will also offer you a small soda or water, which I recommend taking. You don’t realize how thirsty you can get after an hour of frantic clue solving, and the post-game drinks really helped.

Escapology is also available for corporate team building, a process I would totally recommend for any team that is just forming or maybe struggling developing a working efficiency.

I was also surprised by the affordability. Each hour costs $25 per person for up to a group of 6. (if you look around there are promotional codes that make it even more affordable.) Although my experience was comped, the price felt just about right for the experience. 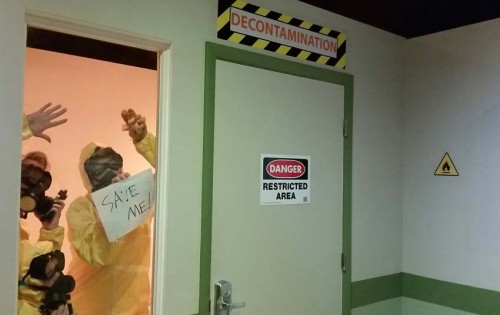 A little goofing around for the camera after we escaped!

In the end, I’m happy to say we saved the world and escaped from our room with plenty of time to spare. Are you up to the challenge? Visit Escapology.Com and make a reservation today.