It’s been a few weeks since we last checked in on the progress of one of three major projects going on at Disney’s Animal Kingdom. The Rivers of Light water pageant promises a new type of night time entertainment that combines, all boats, lights, water projections, and more into a show unlike ever seen at Walt Disney World. 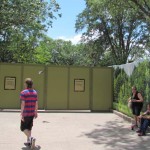 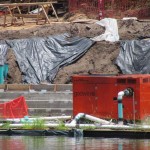 First evidence of the steps/seating for the show 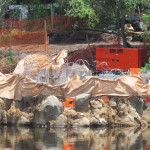 These rocks hide the platform with white piples we saw before 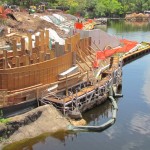 This looks to be a wheelchair ramp

Seats will available on both banks of Discovery River between the Theater in the Wild and Expedition Everest. We can now see some of the seating areas and paths being added.

You can also see what looks like it will be the control booth near the bridge by the Forbidden Mountain plus a lot more in this video shot last weekend:

When Rivers of Light opens it will help extend guest stays at the park past dusk, something that has been long needed.

Stay tuned for Part 2: update from Discovery Island and around the park.