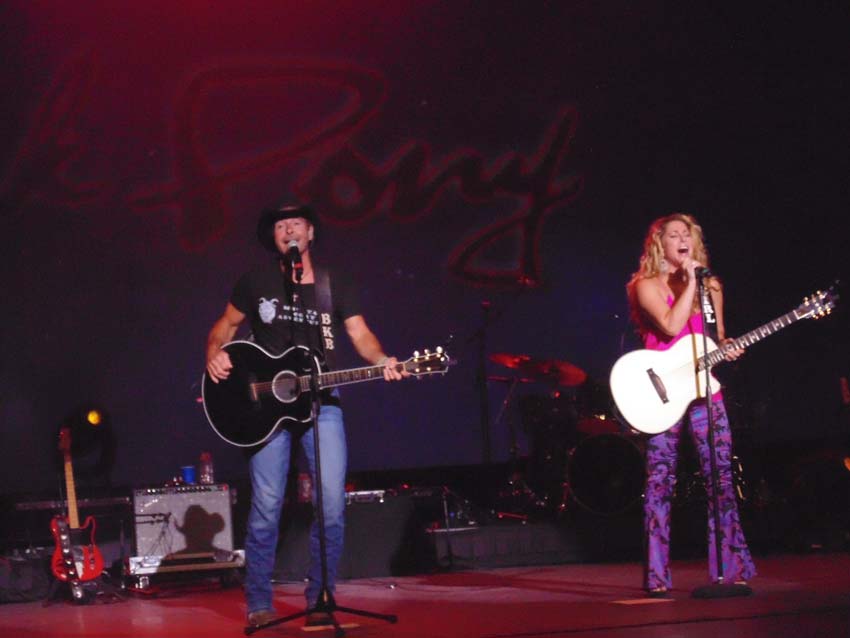 This weekend, SeaWorld Orlando kicked off their Summer Nights promotion with concerts by country artists Trick Pony, and the return of a fan favorite, Shamu’s Celebration: Light Up the Night.

SeaWorld invited The Disney Blog to check out Summer Nights, and I caught the first show by Trick Pony, as part of the park’s new Celebrate America Concert Series.

I’ve been a fan of the band ever since their first hit, “Pour Me,” and it was great seeing them live. Heidi and Keith were giving it their all, and in between songs would engage in sassy banter with each other and the audience. I realized I recognized a lot more of their hits, including Heidi’s solo hit, “Johnny and June, ” and they even played a new track, “It’s a God Thing.”

And thankfully the shows were held in the air-conditioned Nautilus Theater, because temps were in the upper 90s, and it was storming off and on all afternoon.

With it raining so much, I didn’t get a chance to try any of the rides at night, which is another part of the Summer Nights offerings. I’m sure rides like Kraken and Manta are very different under the cover of darkness. I did end up getting a waffle dish sundae from SeaHarbor Soft Serve, and split it with my friend while we waited out another short storm.

Thankfully the rain let up and I was able to catch the final show of the evening, Shamu’s Celebration: Light Up the Night. 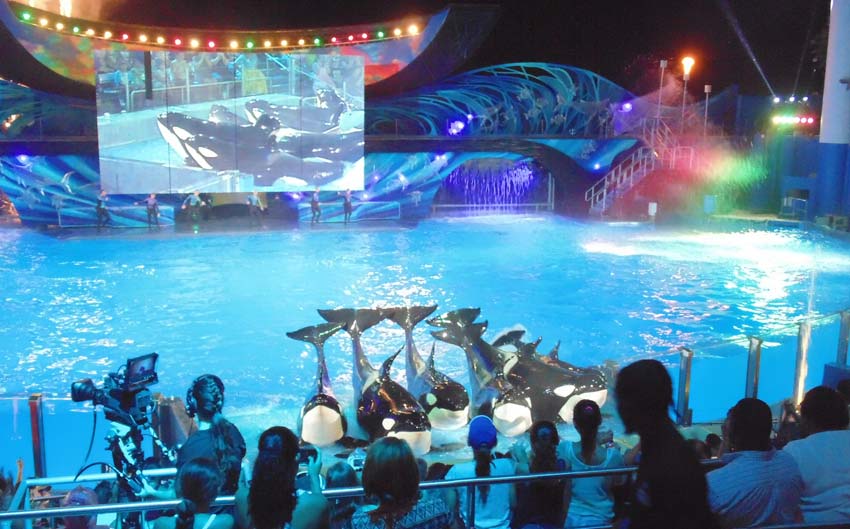 The show is held in Shamu Stadium, at the back of the park, and those who arrive early are entertained by a DJ spinning dance mixes. Cameras scan the crowd, and if your dancing catches their eye, you might get 15 seconds of fame on the jumbotron hanging above the stadium pool.

Once the show starts, it’s packed with non-stop energy and action, with six orcas taking turns performing the aerial jumps and water tricks, like splashing the audience. There is also a platform built into the front of the pool, which allows the orcas to come mostly out of water. It makes for some great photo ops.

One major thing I noticed is that while the trainers were there, there wasn’t as much interaction between them and the orcas, and none of them got in the water with the animals, like they used to a few years ago.

Some of the crowd’s favorite tricks were the multi-orca jumps, and when any of the animals would swim along the edge of the pool, using its tail to splash large amounts of water out at the crowd.

I enjoyed the trick at the end where they all came up on the platform, waving their tails at the audience like they were taking a bow. They then went back in the water, assumed an upside down position and waggled their tails as if they were waving goodbye. All during this, the finale fireworks were going off in the sky.

Summer Nights runs through August 9, with concerts on the weekends. The concerts and Shamu’s Celebration: Light Up the Night are included with admission to SeaWorld Orlando. For more information, or to purchase tickets, visit seaworldorlando.com.

Thanks to SeaWorld Orlando for having us out to check out the first Summer Nights of 2015!

previousTaking the whole family on a ‘grand’ vacation to Walt Disney World
nextInside Star Wars Rebels: The Siege of Lothal