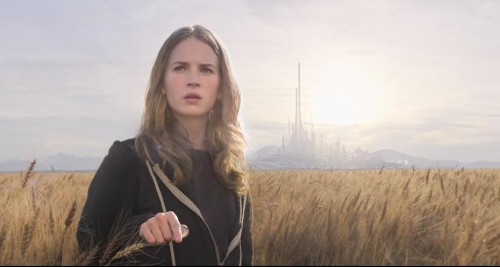 The 4-day Memorial Day Weekend is a perilous spot for movies. Families are usually traveling or grilling or attending parades or some combination of the above. Movies are not high on the list of things to do except as a family activity. But it is the unofficial start of summer and with some of the best films scheduled to be released soon , this was the weekend Disney chose to squeeze in “Tomorrowland,” right after The Avengers (which is still in theaters) and before Pixar’s “Inside Out” (which opens June 19).

Bringing in just over $40.7 million in four days at over 3,952 screens, Disney’s Tomorrowland would be considered sleepy by normal summer standards. But not only was it up against a slow weekend, it had a strong competitor in last week’s #1 film “Pitch Perfect 2” which soaked up $38 million of the box office take.

I’m also going to chalk up some of the poor performance to Disney’s marketing department. They were never really able to communicate to potential audiences why they should see the film other than 1) George Clooney, 2) a future city with jet packs, and 3) mystery. Unfortunately, none of those things pulled as well as they could have. Something more along the lines of a traditional family Disney film would have at least reached the family audiences that this movie is so perfect for.

Take this article in Ace of Geeks, which says that Disney needs to reach out to families with teens and tweens.

It’s got all of the hallmarks of the kind of films that captured our imaginations in the 80s and 90s – bike rides to secret places in the dark, special missions that only a child can solve, and a sense of wonder and adventure just below the surface of what is otherwise a very normal world. It has all of those hallmarks that caused our current, more cynical culture to abandon those films too – it wears its heart on its sleeve, and it believes in a better world if we all just work together.

Still #1 is #1 and Disney will be able to make hay of that in advertising and hopefully building some word of mouth for this original film. It also has yet to open internationally, which should be fairly strong for this film. I think if we talk about the film enough, it will find it’s audience.

What is your hope for Tomorrowland?

previousDisneyland Resort Diamond Celebration: An Overview
nextSpending 24 hours at the Magic Kingdom for the Coolest Summer Ever Kickoff