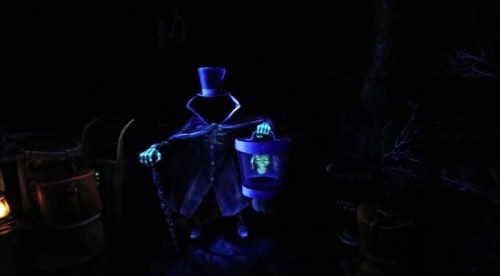 Walt Disney’s Haunted Mansion is perched on the banks of the Rivers of America and has been entertaining guests with spooky thrills since August of 1969. Many a mystery has been spun over the last 45 years, but none quite as confounding as the Hatbox Ghost.

Was the ghost really a part of the mansion? If so, why was the evidence so scant. Other than a few people who swore it was there, we had no proof other than blueprints and a photo at Imagineering

The mysterious tale of the Hatbox Ghost was finally solved when a home movie taken on the ride during cast member previews showed the ghostly apparition in its glory. It was gone just a few days later when the first movie  from regular guests was filmed.

But now, all these years later, the Hatbox Ghost is back, installed in the attic across from the murderous bride. Dan McNeely was on the ride when it opened this morning and he shot this wonder low light video.

Obviously, The new Hatbox Ghost has a few modern magical tricks up its sleeve. Pretty cool though. I hope it comes to Walt Disney World soon.