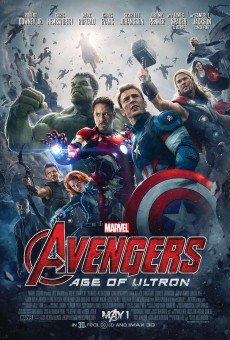 Marvel’s Avengers: Age of Ultron is a worthy successor to the first Avengers movie. In fact, the film wastes no time with pleasantries and plops you right into the middle of the action as if it were a direct continuation of the previous film in the Marvel Cinematic Universe. The Avengers are doing cleanup action attempting to eliminate all remaining elements of Hydra, which revealed itself at the end of Captain America: Winter Soldier.

Hydra’s forces are led by the enemy equivalent to Tony Stark – Strucker. He’s been using alien technology and is using the lessons he’s learned from experimenting on ‘power people’ attempting to build a robotic answer to The Avengers. Luckily the Avengers do get there in time to stop him.

What Tony Stark sees in the enemy fortress sets off the events of the rest of the film, creating the real enemy an Artificial Intelligence with a very corporal desire and a thing for extinction level events.

That is Ultron, voiced by the wonderful James Spader. Ultron is eccentric, flippant, stumbles over words, and singularly driven to a purpose – if you’ve watched NBC’s “Blacklist” you might recognize a little of Spader’s character Reddington in Ultron. But that’s okay, it works.

The movie plays the creation of Ultron as an act of ultimate Hubris by Tony Stark, but in a very Whedon-esque way, all the Avengers are dealing with their own past sins. Is Stark’s sin really any worse than the others?

Director Joss Whedon brings all his skills and tendencies to the film. This will either delight or horrify you depending on how you like other films in the Whedon-verse.

As with Whedon’s usual writing, there is the flair for the dramatic and some key mis-direction. I also enjoy his gift for dialogue writing. He tosses off cultural references that make the movie seem Au-currant in ways a superhero film usually does not.

Whedon manages to make our Super-Heroes seem both invincible and vulnerable at the same time. While the vehicle for that is ultimately not as heartbreaking as it has been in other Whedon movies, it still comes as a bit of a shock.

My biggest complaint about the film is that while the action moves hurriedly, the character development does not. Instead, it’s used to drive the plot, which is okay, but there are a few significant changes toward the end of the film that aren’t really explained overtly. Like some important dialog was left on the cutting room floor and the audience is left to figure it out by reading an eye-glance here and there.

The Avengers: Age of Ultron suffers a bit with it responsibility of being a middle-film in a The Avengers trilogy (yes, part 3 “infinity stones” is a two-parter, but it’s still a trilogy). It has to get the gang from here to there and establish them as world defenders. There tends to be a lot of hopping around from far flung local to another with no real explanation other than that’s where the computer says to find their next clue.

But audiences won’t have a hard time following the story and will definitely enjoy the popcorn-movie action. I saw it in 3D, which did put me more in the middle of the action than a 2D film would. If you like that, then by all means go see the 3D version on the largest screen you can fine. However, the scope of the film really doesn’t required 3D. You should be fine with out it.

The only questions left now are, how many times will you see it in theaters and what will Avengers reap at the box office?

3 thoughts on “Marvel’s Avengers: Age of Ultron – My Review”