Disney’s “Descendants” arrives this summer as new Disney Channel Original Movie. The first trailer for the new movie gets us an extended look at the contemporary world that’s created when the children of heroes and villains encounter each other in a school setting.

Okay, that looks suitably campy for a DCOM. There might even been a good song or two in there. The adventure comedy will premiere on the Disney Channel in 2015.

I’m looking forward to Kristin Chenoweth (“Glee) as Maleficent and Kathy Najimy (“Hocus Pocus”) as the Evil Queen. With just a few frames in the trailer, they’re already chewing up the screen. It’s also great to have Kenny Ortega back to direct and choreograph the movie. 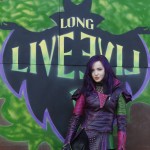 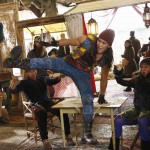 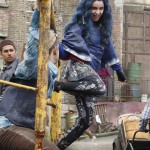 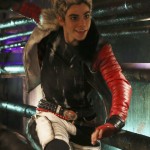 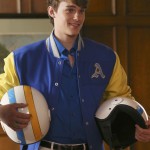 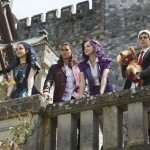 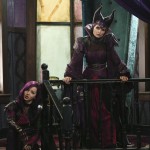 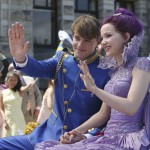 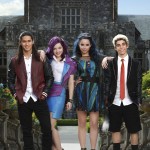 In a present day idyllic kingdom, the benevolent teenaged son of the King and Queen (Beast and Belle from Disney’s iconic “Beauty and the Beast”) is poised to take the throne. His first proclamation: offer a chance at redemption to the trouble-making offspring of Cruella De Vil, Maleficent, the Evil Queen and Jafar who have been imprisoned on a forbidden island with all the other villains, sidekicks, evil step-mothers and step-sisters. These villainous descendants (Carlos, Mal, Evie and Jay, respectively) are allowed into the kingdom to attend prep school alongside the offspring of iconic Disney heroes, including Fairy Godmother, Sleeping Beauty, Rapunzel and Mulan. However, the evil teens face a dilemma. Should they follow in their nefarious parents’ footsteps and help all the villains regain power or embrace their innate goodness and save the kingdom?

Dove Cameron (“Liv and Maddie”) will play Mal, the daughter of Maleficent.  Booboo Stewart (“X-Men Days of Future Past”) has been cast as Jay, the son of Jafar.  Newcomer Sofia Carson will play Evie, the daughter of the Evil Queen, and Cameron Boyce (“Jessie”) will play Carlos, the son of Cruella de Vil.  Australian newcomer Mitchell Hope has been cast as Ben, the son of Belle and the Beast.  The onscreen parents for this cast includes Kristin Chenoweth (“Glee) as Maleficent, Maz Jobrani (“The Interpreter”) as Jafar, Kathy Najimy (“Hocus Pocus”) as the Evil Queen, and Wendy Raquel Robinson (“The Game”) as Cruella de Vil.

The Emmy Award-winning director and choreographer Kenny Ortega (“High School Musical,” “Newsies”) is directing, and is also executive producing alongside Wendy Japhet (“An Education”, “The Italian Job”). Ortega is doing the choreography with longtime collaborator, Paul Becker (“So You Think You Can Dance Canada”).

Are you looking forward to revisiting high school with Disney’s “Descendants”?