The Oriental Land Company, announced several themed developments to be added to the two parks of the Tokyo Disney Resort. For Tokyo Disneyland, two areas within Fantasyland will be redeveloped to concepts from Disney’s Beauty & The Beast and Alice in Wonderland. Tokyo Disney Sea will welcome Arendelle with its Norway inspired Frozen designs. New shops, restaurants, and attractions are all planned for the expansions. 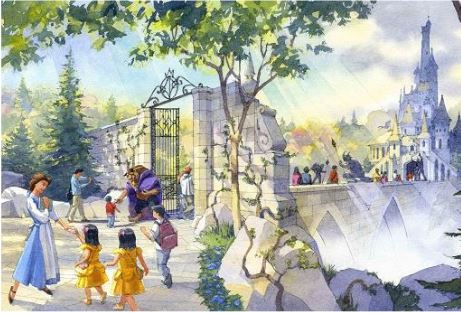 The Tokyo Disneyland work will actually expand Fantasyland, nearly doubling the size of the themed land. The Beauty & The Beast area will look familiar to anyone who has visited Be Out Guest restaurant at Walt Disney World’s New Fantasyland, but look at the size of that castle. The Alice in Wonderland area answers a demand from Japan’s Disney fans who have always shown a particular obsession with the Alice and Mad Hatter characters. Frozen’s Arendelle will be the eighth themed port added to Tokyo DisneySea and will be located south of Lost River Delta. It will feature designs inspired from the movie and Scandinavia in general. The Arendelle castle and Queen Elsa’s ice castle are featured prominently

These plans actually leaked online a couple months ago and the response has generally been positive. The changes in Fantasyland could involve some attraction relocations (it’s a small world included) and other popular locations will get a refresh. With the success of Disney’s Frozen, it’s no surprise that Tokyo Disney Sea will add a whole land based on the franchise. The concept art looks like it will be very extensive and impressive.

With the American Dollar so strong against the Yen right now, it might be the best time ever for a vacation. What do you think of the announcement?