How long can Disney top pigs with pigs? 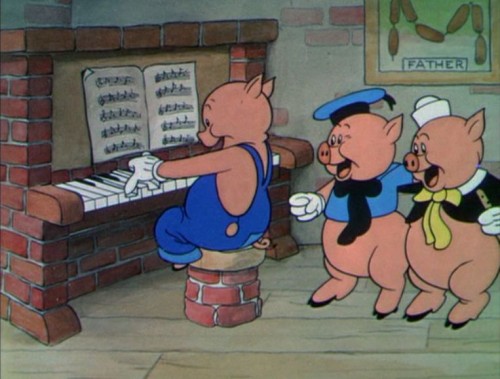 “You can’t top pigs with pigs,” Walt Disney reportedly answered after being asked by theater owners whether he’d make another Three Little Pigs short after the first one had won an Academy Award and had considerable box office success. Of course, the irony is that Walt eventually did go on to make several sequels to that short.

A new editorial by Peter Bart in Variety takes a slightly tongue in cheek look at the quandary Disney CEO Bob Iger is facing. Does he cash in with sequels or try the more difficult path of original productions. After spending more than $15 billion to buy the franchise factories that are Pixar, Marvel, and Lucasfilm. I think you can figure out the answer.

Why invest in live-action gambles like “John Carter” or “The Lone Ranger” when a mere $100 million can resuscitate a foolproof property like “Cinderella” — one that has been regularly recycled since George Melies’ version in 1899? How can you lose with “Frozen 2,” when its first iteration grossed $1.27 billion worldwide?

Of course, there’s Pirates of the Caribbean, which is filming again, and Star Wars, which has five movies scheduled in the next five years. Not to mention the whole Marvel Cinematic Universe, which is really one sequel after another. Disney has shown considerable success going down that path. Iger is not shy that he wants franchises to be the bedrock upon which Disney’s financial future is built.

Up against those sequels are the remakes. After “Cinderella,” Disney has announced remakes of “Beauty & The Beast,” “The Jungle Book,” and “Dumbo.” Surely, a remake of every film in the Disney classic library can not be too far behind.

What I’m interested in are the “Brand Deposits.” That’s Iger’s term for those smaller films that help re-enforce the Disney brand. These include those feel good sports movies (“McFarland USA,” “Million Dollar Arm”), family comedies (Alexander and the no good…, “The Odd Life of Timothy Green”), and ‘art’ films (“Saving Mr. Banks,” “Into The Woods”). The theory is that if Disney banks enough of these films a year, they can get away with some movies that stretch the limit a bit. It’s not a bad theory, Steve Jobs used it to great effect at Apple for many years.

Read the whole piece at Variety and then let us know if you think Disney is on the right track with its film strategy.

3 thoughts on “How long can Disney top pigs with pigs?”