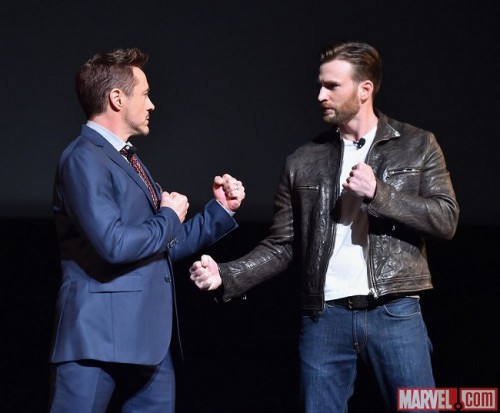 We’re just about a month away from the theatrical premiere of Marvel’s Avengers: Age of Ultron and already rumors are beginning to leak about the following movie in the Marvel Cinematic Universe – Captain America: Civil War.

I won’t go into the rumors here, but I will share the official synopsis that Marvel released as part of casting notices:

Following the events of Age of Ultron, the collective governments of the world pass an act designed to regulate all superhuman activity. This polarizes opinion amongst the Avengers, causing two factions to side with Iron Man or Captain America, which causes an epic battle between former allies.

I assume they’re referring to the Superhuman Registration Act, which was put in place to regular all superhuman activity and to expose superhuman’s secret identities. This is a big issue for some superheroes is probably how Marvel will introduce Spider-Man to the Marvel Cinematic Universe. The world knows who Iron Man is (Tony Stark) and that Captain America is Steve Rogers, but Peter Parker probably isn’t too keen to have his co-workers know who is really is.

We know from Marvel’s Agents of S.H.I.E.L.D. that SHIELD already registers and tracks known superhumans. In fact, the TV show is concerning itself with Inhumans quite a bit this season. There could be quite a bit of overlap between the big and small screens in the Marvel Cinematic Universe going forward.

Filming is said to start April 1st and with casting calls going out in Atlanta. That’s the rumored location too.