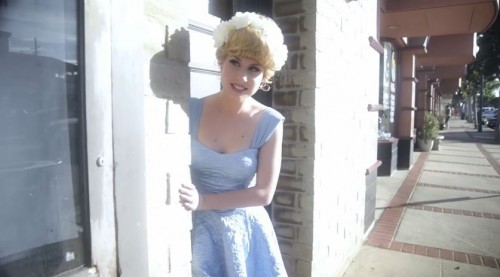 A new single from Traci Hines, of Disney Little Mermaid cosplay fame, was just released. “Cinderella” is all about having hope and determination to make your dreams come true. Written by Traci and her producer Adam Gubman.

It’s not a cover of a song from Disney’s Cinderella, instead it’s an original number that really captures that Disney feel.

Of the song Hines says, “The concept started out with Cinderella, which is why I kept the theme of the video inspired by her, but the song is meant to be sort of our take on if we got to write a new song for a modern Disney Princess film, whether it was for Cinderella herself, or a whole new character. I’ve been singing Disney music for as long as I can remember, so it was really fun to imagine what it would be like to write something a Disney Princess would sing.”

There’s definitely room in the world for more Disney songs, even if they’re not original Disney songs. As a long time role player with a focus on Disney, Hines is well positioned to create these songs. I hope she continues.