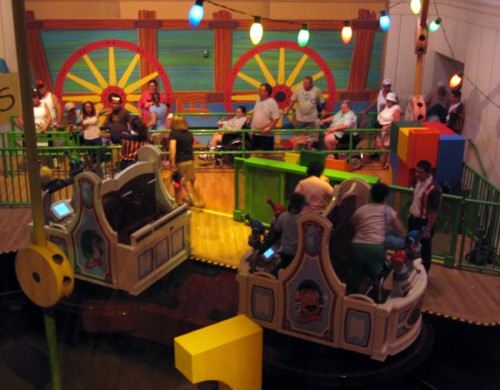 In addition to today’s announcement that Soarin’ at EPCOT would be getting a third theater, Disney announced that a third track will be coming to Toy Story Midway Mania at Disney’s Hollywood Studios.

Toy Story Midway Mania opened in 2008 and like Soarin’, TSMM is a family attraction and the waits for can grow quite long. Fastpass+ is very much in demand.

Late last year, Disney began prepping to add a third track to SoundStage One (most recently held the ice rink for the Frozen exhibit). It is believed that after some testing last year, Disney will keep two of the tracks dedicated to Fastpass+ users and send all standby guests to the new third track.

According to Disney the expansion will open sometime in late 2016. It’s not known how many closure days will be required to make this transition, but some are expected.