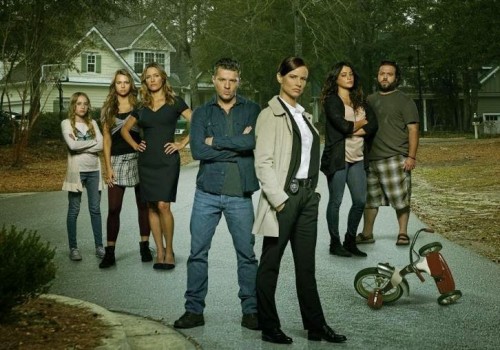 Secrets and Lies, or “Juliette Lewis Stares,” as I call it, is a new ABC limited series premiering this Sunday. Starring Ryan Phillippe as Ben Crawford, it follows as he goes on a morning run to find a local boy dead in the woods. What follows is a whirlwind or questioning, and the titular secrets and lies.

Juliette Lewis plays Detective Andrea Cornell, who is on the case, and the woman LOVES to stare. Creepily, eerily, and oddly…she stares. A lot. Through windows, at Ben, in his home…she stares. Ben talks monotone the entire time, so you don’t really care for him, and then Andrea is just so creepy, so you don’t care for her. It is weird to come out of a pilot without someone to root for.

The show dragged on for me, without any real movement. Andrea was weird, Ben was angry he was seen as the main suspect for the child’s murder, especially when the child was so beloved in his family, and Ben and his wife, played by KaDee Strickland, fight over the case at hand, and other turmoil that occurred before the pilot. Also featured is Ben’s friend who lives with them/in a house in the backyard. His purpose is to seem like a schlub, and he does and it makes no sense. Why is he there? Should I care? Because I don’t.

An underlying moral of the story is how the media is awful, which is weird for a network series as…um…they are part of the media with their news (as opposed to someone like HBO having a “media is awful” undertone, since they don’t have a dog in the fight). They tackle Ben and is family over and over again, ad it makes you never want to watch the news again.

The thing that has me hooked and ready to watch for more, however, is the cliffhanger, which comes out of nowhere, makes complete sense, and hits you with a steel bat. I’m interested to see where it takes the show, and if it can exit monotone land into quality ABC programming. I’ll be watching more to see if that journey is possible.

Secrets and Lies premieres March 1st at 9pm EST, only on ABC.

previousLeonard Nimoy, dead at 83, voiced Kida’s father in Disney’s Atlantis: The Lost Empire
nextTop Posts of the week on The Disney Blog