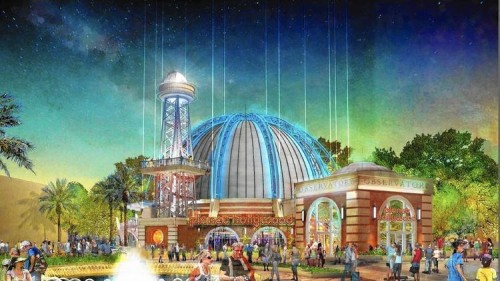 It’s long been one of the most popular and iconic elements of Downtown Disney, but the giant Planet Hollywood globe will soon be transformed into an elegant looking observatory that harkens back to the golden age of Hollywood with its classic forms.

Concept art for the renamed “Planet Hollywood Observatory” was just released and it shows how the restaurant exterior will be transformed to match the style of Disney Springs. The transformation will also add outside seating.

“Disney is turning it into a turn-of-the-century Central Florida mining town, and the observatory was a feature at the time,” said Robert Earl, founder & chair of Planet Hollywood International. “We’ve gone back to that look for Planet Hollywood.”

For the interior, the props and costumes will remain but the design will be updated to match a planetarium feel with stars and constellations on the ceiling.

Construction has already begun and is planned to be completed in 2016.