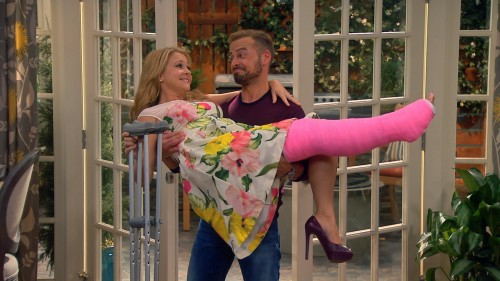 After four seasons and more than 100 episodes, “Melissa & Joey” will end its run on ABC Family this summer. Melissa Joan Hart played local politician Mel Burke and Joey Lawrence was Joe Longo, who she hired to look after her niece and nephew. While not directly based on the 80’s characters played by Melissa and Joey, there was a lot of rollover, which made it easy to like the new charactars.

“We are proud of the milestones Melissa & Joey has achieved, being the network’s first sitcom to reach 100 episodes and the network’s first comedy to win a People’s Choice Award,” said Karey Burke, ABC Family executive VP of programming and development. “Now that the kids are grown and Mel and Joe have married and are looking toward starting a family, it seemed like a natural time to bring the series to a close. We are grateful to Melissa Joan Hart and Joey Lawrence, and the whole cast and crew who worked so hard on this successful show.”

Are you sad to see the end of “Melissa & Joey”?