Lady Sif of Asgard returning to Marvel’s Agents of S.H.I.E.L.D. 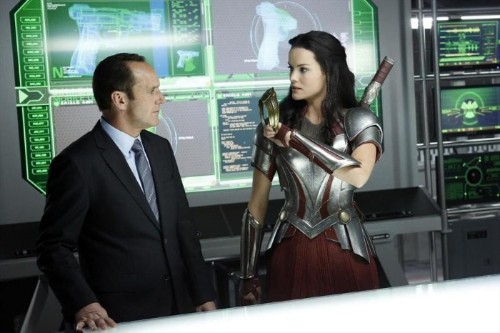 With the March 3rd return of Agents of S.H.I.E.L.D. quickly approaching, news of what the second half of the season is beginning to emerge.

TV Insider brings news that Lady Sif of Asgard is making a return to the show in the second episode but in an unexpected way. A fight with a villain who Marvel has yet to identify brings Sif back to Earth…and with no short-term memory.

“Sif has no idea who Thor is or that she serves a king, and we’re going to have fun with that,” says executive producer Jeffrey Bell. “It’ll give us some much-needed humor in a season that’s been full of betrayal and death. Sif can’t even recall who she came here from Asgard to stop, but Agent Coulson and his team will try to help her figure all that out.”

While she doesn’t have short-term memory, her long-term memory is still in tact. Bell continues, “We’ve been dealing a lot with space aliens and Inhumans in our last few episodes—things our Earth-bound heroes just don’t know much about,” Bell says. “They need help understanding what’s really going on. Sif’s memory—what’s left of it—will come in very handy.”

I am looking forward to the return of Sif, what about you? And, who do you think the mysterious baddie is?