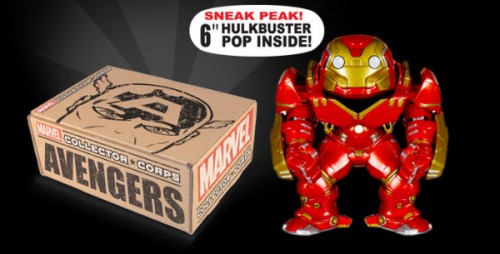 File this one under “shut up and take my money!”

Funko has announced it is collaborating with Marvel to build a first-of-its-kind subscription box service, called Marvel Collector Corps. Each box will feature 100% exclusive collectibles, apparel and accessories from some of the biggest events in the Marvel movie and comic book universe.

The first box ships in April and will feature items from Marvel’s Avengers: Age of Ultron, including an exclusive 6” Iron Man Hulkbuster Pop! vinyl collectible only available through Marvel Collector Corps. What? That doesn’t sell you on the box? The contents of this April box will also include a T-shirt featuring one of four exclusive designs (in sizes up to XXXL), an additional stylized vinyl collectible, and two premium accessories. The box represents over $50 of value.

Your cost? Only $25 per box, plus shipping and taxes.

Boxes will ship every two months, which isn’t too hard on the wallet. I’m told Marvel’s Ant-Man will be featured in the June box, in advance of the movie’s July 17th release date in the U.S.

You can stop receiving shipments at any time, but if you’re a diehard Marvel fan who knows they’re in it for the long-haul, then sign up for the limited Founders Program account. You will be billed $150, plus shipping and taxes, for a full year of boxes (that’s 6 in total), plus every year on your anniversary with the service (if you haven’t let your membership lapse), you will receive an exclusive Founders Figure.

For more information, or to sign up (because if you’ve read this far, you’re probably going to), visit collectorcorps.com.