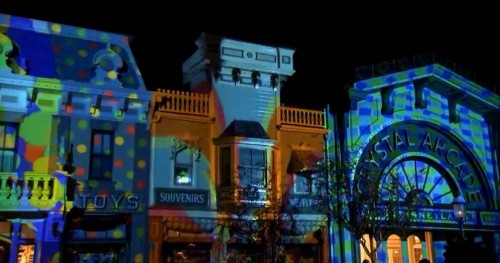 Last night Disneyland made the big announcement covering the three new shows coming to the park for its diamond celebration 60th anniversary. One of those shows is a new fireworks show called “Forever.” The premise is to Live the Magic by surrounding guests with visuals, not just in the sky, but all around them. They’ll do this using a combination of special lighting, digital mapping projection, and fireworks.

Here’s a video of the demo they did in the park last night for press and invited guests:

Right at the beginning you see honeycombs from Winnie the Pooh, although it’s not in this video, they also demonstrated a great floating lantern segment from Tangled. But I think you’re really just seeing the very surface of what is possible with this technology

In fact, this video makes me think of what they were trying to do with Light Magic. Only instead of projections, they were going to put fiber optics everywhere. They wanted to put them in the street and sidewalks and cover the faces in them. Then they would program them to change colors in patterns. The demo of it was pretty cool, but it never really worked like intended.

This, on the other hand, has all that potential and a lot more. As you can see it will be completely immersive and not just on main street either. Where Disneyland can find a surface to project upon, they will do so around the park during the fireworks. The projections will also vary, so depending on where you are in the park, you’ll get a completely different show.

I realize Disneyland needs something special for their birthday, but I hope they hurry and bring this to Walt Disney World soon. (In fact, I suspect you’ll see it at Disney’s Animal Kingdom on the Tree of Life soon.)