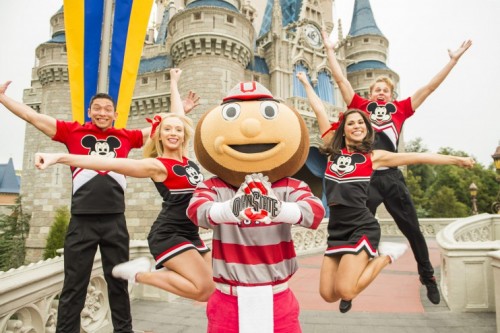 It’s a few days late, but congratulations to Ohio State University on winning the College Football Playoff National Championship game on ESPN! Looks like Brutus has finally made it to Walt Disney World!

Above, the Ohio State University mascot Brutus Buckeye poses on Jan. 14, 2015 with Disney cheerleaders at Magic Kingdom. Brutus visited the theme park to celebrate OSU’s 42-20 win against the University of Oregon Ducks Jan. 12 in the inaugural College Football Playoff National Championship on ESPN.

Okay, traditionally, the game’s MVP is the one who makes it to Walt Disney World and ha a parade. But this is college, they do things differently. They should hold the championship game here in Orlando and the winning team can be feted at Walt Disney World the day after.

If you didn’t see it, here’s the commercial for Brutus finally making it on the plane.

previousAgent Carter Recap: Episode 3 – Time and Tide
nextSony and Marvel may have made a deal concerning Spider-Man