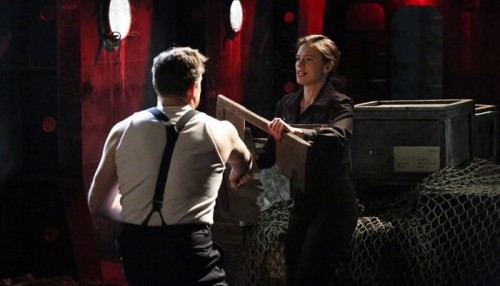 Back at her apartment, Peggy is getting ready to meet Jarvis when Angie shows up at the door. She tries to turn Angie away politely, but Angie is hurt non-the-less. As they leave her apartment, their landlady walks by and introduces them to her new tenant: Dorothy “Dottie” Underhill. Some people in the fan community think that Angie shouldn’t be trusted, but my money is on Dottie. This is the only scene that she’s in (clearly anyway) and I don’t think they introduced her for no reason. There’s more to her story.

Peggy finally ends up back at Stark’s house and she and Jarvis head down to the safe. Last week, it was implied that Jarvis hasn’t seen much action in his life, but I like that we get to peek behind the curtain this week and see that he is a capable partner for Peggy. In the sewer, Carter concludes that Brannis used the raised storm water to float Stark’s technology out to the river. From the drain, they see a boat in the harbor that has the symbol that was written in the dirt last week.

We also learn what the story is behind Jarvis’ treason charge and dishonorable discharge. In the army, Jarvis met a Jewish woman: Anna. In an attempt to free her, he forges a general’s signature, but gets caught. The only reason he and Anna didn’t get a harsher punishment was because of Howard Stark, who didn’t like general but did like Jarvis.

Later, on board they find crates labeled with the Stark Industries logos. In one, they find a device the constrictor that causes muscle failure. Jarvis convinces Peggy that it is better for her and Stark to call this find in anonymously instead of getting the credit for it herself.

While Jarvis is out calling the SSR with their tip, Peggy is attacked by someone who says that he was warned that “one of you would be coming.” Just as the attacker overpowers Peggy, Jarvis returns and turns the tide on the fight. Peggy ends up sticking the man in the arm with the constrictor and he collapses.

Later, at the dock, Souza and Krzeminski find Stark’s tech and the unconscious attacker. As he is being taken into custody, the man mentions fighting an English broad. Krzeminski begins figuring out what’s going on, unfortunately, his car gets bumped. Krzeminksi get out of the car and is promptly shot. The mystery person (who I think is Dottie) then shoots the man in custody.

The episode ends with everyone in the office mourning over Krzeminski. Thompson says it was a professional hit. Souza thinks they were set up because he makes a false connection between Jarvis’ anonymous tip and the assassin and Dooley blames Stark, whether directly or indirectly, for Krzeminski’s death.

Even though this episode is light on action, there are some good character moments, especially with Jarvis, and more intrigue for the remaining five episodes to unravel.

In two weeks, we’ll get a new episode that includes not only the return of Howard Stark, but the Howling Commandos and the requisite Stan Lee cameo, but until then: What did you think?