Star Wars Thanks Fans for Generosity 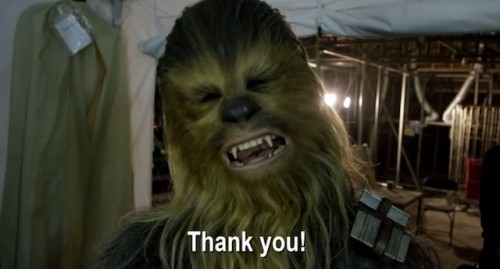 In the latest video from the set of Star Wars, J.J. Abrams and the crew from Star Wars Episode VII thanks fans for their support of the “Force for Change” initiative to support UNICEF. Earlier videos from Abrams included a look at part of a desert city and a glimpse of the film’s new X-Wing fighter.

Great to see Chewbacca and R2D2 and a few glimpses of set pieces, but there were not really any big reveals this time, except for that final dollar amount of $4.26 million. That was great. Other fun stuff to watch out for is the clapperboard with Episode VII on it — looks like they didn’t use the name “The Force Awakens” on set. Also, what are they shooting paintballs for? The mind boggles.

(Hat Tip /Film for the video)