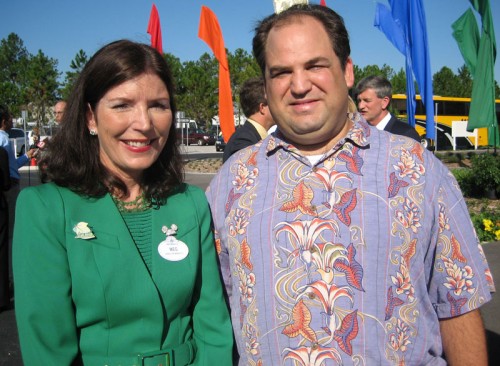 The author and Meg Crofton

Disney parks executive Meg Crofton has announced a date for her retirement from the Walt Disney Company. In a statement she wrote:

“I am deeply proud of every moment I have spent here and I am so excited and confident about the future of our company. It is that excitement that makes my decision to retire so bittersweet.”

Crofton rose through the ranks on the hotel and human resources side of the resort. She was president of Walt Disney World for 5 years before being promoted to the Chair of all Disney parks and resorts in the US and Europe in 2011. She worked for the Mouse for over 30 years in total.

If you haven’t seen Crofton in Orlando much lately, that’s because her new position required she work mostly out of Disney’s HQ in Burbank, CA. Her tenure at the parks has seen quite a bit of change come to Walt Disney World, but not necessarily the change the parks needed, at least according to many fans. To be fair, the parks continue to play a huge part in the company’s bottom line, attraction more visitors to stay on site that ever before, and continue to win awards and accolades as the most popular magical on earth. It cannot have been an easy job.

The few times I met Meg, I found her to be a genuinely nice person. If this isn’t part of some restructuring, it is my sincere hope that the next person to fill her shoes, comes from an operations background.