Pixar’s The Good Dinosaur reportedly back on track 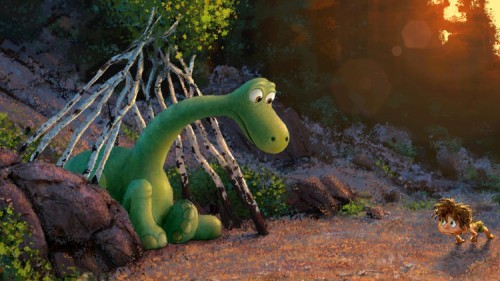 In October, we reported that Pixar’s animated feature “The Good Dinosaur” had been moving forward with a new director – Peter Sohn. Sohn even hand drew a little teaser video. After replacing the previous director, a not uncommon occurrence at Pixar (it’s happened in 4 of the last 8 films there), Sohn was charged with getting the story back on track in time for a November 2015 release date. According to a story from Rebecca Keegan in the LA Times, all seems to be going well.

Sohn, who joined Pixar after working on Brad Bird’s “Iron Giant,” previously directed the animated short “Partly Cloudy.” With “The Good Dinosaur,” Sohn is moving to feature length animation for the first time. He’s focused the story as a buddy comedy about a teenage dinosaur, Arlo, and a human boy, named Spot.

“The heart of the story remains the same,” Sohn said, in an interview last week. “It’s always been about this young dinosaur growing up. But the world itself has changed a lot. Nature has become a character.”

As the story goes, in The Good Dinosaur, the asteroid never hit the earth, so dinosaurs continued to evolve and eventually started taking on humans as pets. Sounds intriguing.

Read the rest of the story over at the LA Times.