Peter Sohn must have his day at Pixar scheduled down to a T. Not only is he the voice of many popular characters from their films (Emile in Ratatouille, Russell in Up, and Squishy in Monsters University), he’s a story board artist, animator, and now a feature director. Sohn is currently directing The Good Dinosaur which is one of two Pixar films coming out in 2015. 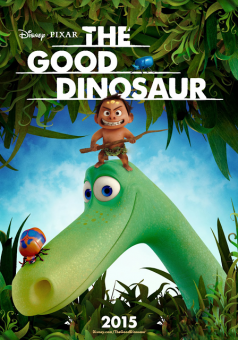 The original idea for The Good Dinosaur was from Pixar artist Bob Peterson, but he was moved from the movie last year to a different project and now Sohn is working on getting everything ready for its November 25, 2015 release. The movie was originally scheduled for a 2014 release, but much of the film has been reworked and some of the actors have been asked to return to record new dialog.

Plot Synopsis: The Good Dinosaur asks the generations-old question: What if the cataclysmic asteroid that forever changed life on Earth actually missed the planet completely and giant dinosaurs never became extinct? The film is a humorous and exciting original story about Arlo, a lively 70-foot-tall teenage Apatosaurus with a big heart. After a traumatic event rattles Arlo’s tranquil community, he sets out on a quest to restore peace, gaining an unlikely companion along the way – a young human boy named Spot

Surprisingly, we haven’t heard much else about the film, but yesterday Pixar released a little teaser from the artistry of Sohn’s own hand.

I wish there was more than that.

No matter how Pixar sees fit to use him, Peter Sohn hasn’t disappointed me yet. I can’t wait to see more of Arlo and see what Sohn can deliver this time.