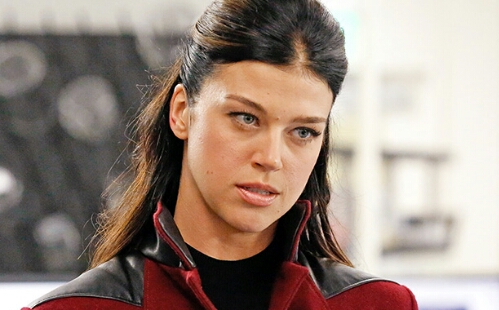 Last night’s episode was less focused on action (though Bobbi Morse did a great impression of Natasha Rominav) and more focused on setting the stage for what’s to come.

Hydra is attempting to weaponize the obelisk’s power but without the obelisk itself they are limited to using a sample from one of its victims, and coming up unsuccessful. In the meantime, Raina goes back to Skye’s father for help with delivering the obelisk to Hydra in order to save her hide.  However, he isn’t happy that she has failed to deliver his daughter to him so he refuses.

On her way to Hydra, Raina spots Simmons and decides to use her double agent status to blackmail Coulson. She arranges a meeting with him and offers not to reveal Simmons to Hydra if Coulson allows her to take Skye to her father. Coulson refuses the offer and Raina is visibly shaken (a great performance by Ruth Negga) but she exposes Simmons’s cover anyway. Hydra security chief, Bobbi Morse, has had some run-ins with Simmons as Morse pursues seeks out the mole that has been feeing S.H.I.E.L.D. information. She did a great job intimidating Simmons and actually had me convinced that she was going to have a long road to becoming the hero, Mockingbird.

Fortunately, Bobbi is working undercover for S.H.I.E.L.D. as well and rescues Simmons. Coulson has Raina tagged so she can lead them to Hydra, and she gives him the location of Skye’s father. Skye leaves the team to find him, but he is already gone.

Skye resolves to help the team defeat her father and Coulson finally tells her the truth about the writings. Her first theory is that they are a map. Fitz and Simmons are reunited and Bobbi officially joins the team. I love that all of Hunter’s throwaway lines about his evil ex-wife paid off with the revelation that his ex-wife is Bobbi.  That was a fun twist.

The final scene shows Skye’s father delivering the Obelisk to Whitehall on his own and offers to join forces with Hydra, for the purpose of killing Coulson and…everyone else.

Overall, a really fun episode.  Next week looks to be even more exciting as they will reveal the teaser trailer for Avengers: Age of Ultron.

What did you think of last nights episode?