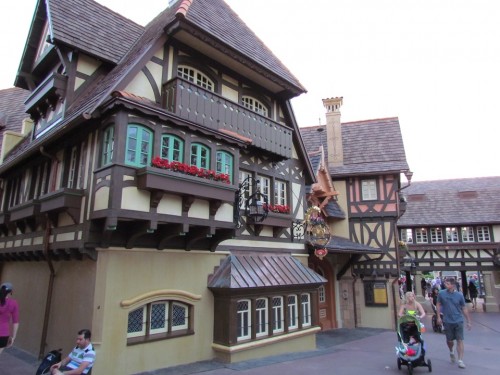 The Columbia Harbor House is the place to go for seafood when you’re at the Magic Kingdom. They have the usual fare of fried fish and shrimp baskets and some wonderfully cooked grilled salmon. Also don’t forget the Tuna Sandwiches, one of my favorite lunch menu items in the park.

When we were at this year’s Mickey’s Not-So Scary Halloween Party we snuck in a quick meal at the Harbor House and were surprised to find a couple new items on the dinner menu.

Normally, when we come, our son gets the kid’s meal Mac and Cheese, which looks like this: 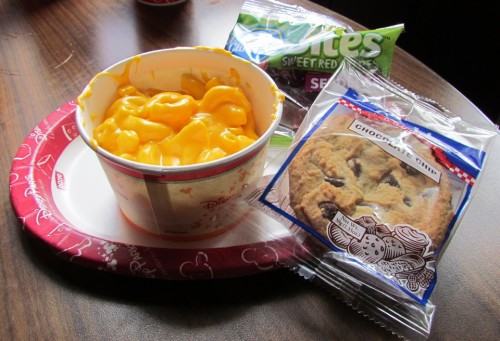 but this time, they had a Seafood Mac and Cheese with shrimp and lobster. It’s served in a larger bowl, but is the same Mac & Cheese served with the kid’s meal. Over the top they add a decent portion of shrimp and lobster meat (ours was almost all claw meat) then sprinkle the whole dish with panko crumbs to provide a little crunch. The portion was large, but the dish could have done with out as many panko crumbs, or perhaps some seasoning or time in the oven to toast them and bring out the flavor. But overall this was a winner at our table. Seafood Macaroni & Cheese was $10.99.

The second new dish we tried at dinner was the Chicken Pot Pie. It came with coleslaw and steamed fresh broccoli. It was served in a smallish portion, but was full of chunks of chicken and vegetables (carrots, peas, and corn) and a rich flavorful gravy to hold it together. It too was topped with bread crumbs to provide some crunch, but I found that crunch distracted from the overall texture of the pot pie. I’ll order it again, but hold the panko crumbs. 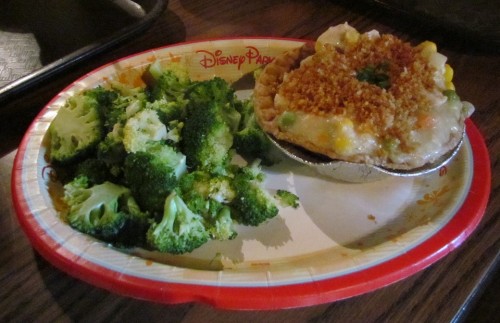 You can’t finish a pot pie without eating the crust and Disney’s pot pie had one with a lot of buttery flavor. It was a bit on the crumbly and dry side for me, but the taste was good. The Chicken Pot Pie comes with a heap of steaming broccoli and will set you back $9.59

Both these new items are only served after 4pm. It’s rare for counter service to have different menus at lunch and dinner, but I like the option for variety. Will you try either of these dishes on your next visit?