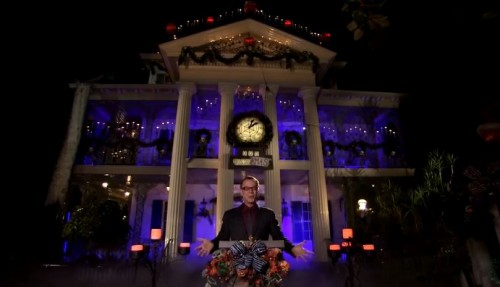 In a rare live performance, Danny Elfman will perform music from the films of Tim Burton. Tickets are available for the nights of October 31th & November 1st at the Nokia theatre in Hollywood, CA. To help promote the festivities, Elfman stopped by Disneyland’s Haunted Mansion to record a special preview; reading of the introduction to Tim Burton’s “The Nightmare Before Christmas.”

Elfman and Burton’s first collaboration was on Pee-wee’s Big Adventure. He went on to compose for many films, but has always had a special tie to the somewhat creepy worlds of Tim Burton. Elfman even provided the singing voice for Jack Skellington in Tim Burton’s “The Nightmare Before Christmas” and the voices of both Barrel and the “Clown with the Tear-Away Face.”

2014 marks the second year for this concert series titled Danny Elfman’s Music from the Films of Tim Burton. The concert features the Hollywood Symphony Orchestra and Choir conducted by John Mauceri. Music and visuals from Batman, Edward Scissorhands, The Nightmare Before Christmas, Beetlejuice, Pee-Wee’s Big Adventure, Alice in Wonderland and more! Get your tickets today as this show did sell out last year.