Imagine a world without Walt Disney. How he narrowly escaped death on September 4, 1918

Note: This article is republished courtesy Leo N. Holzer and the Friends of the Walt Disney Family Museum. Thanks to David Lesjak for sharing his research with us.

Imagine a world if Walt Disney had died on Sept. 4, 1918. It almost happened. 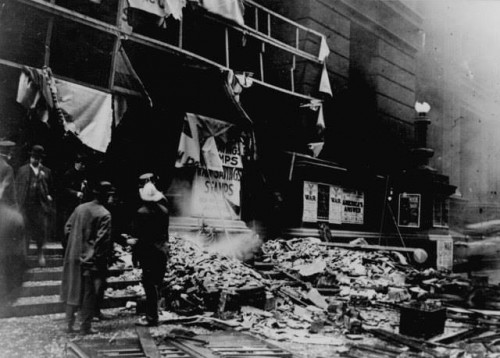 Postal employee Walt Disney, who was a substitute mail carrier at the time, was walking through the West Adams Street lobby of the Federal Building in Chicago when he heard a deafening blast that shook the ground.

A bomb blast killed four people, including Walt’s co-worker William Wheeler, and left more than 75 other people injured. The force of the blast also killed a horse on the street, damaged a streetcar and shattered windows on nearby buildings.

“I was in the post office. I just got though sorting my mail, or finishing my route. I was walking out … going out a certain entrance … when it was bombed. I was right in the lobby when, FOOOOOM, this thing went off. Here comes the dust shooting out and everything. That was the way I went out every night. I missed that darnn thing by about three minutes.” – Walt Disney 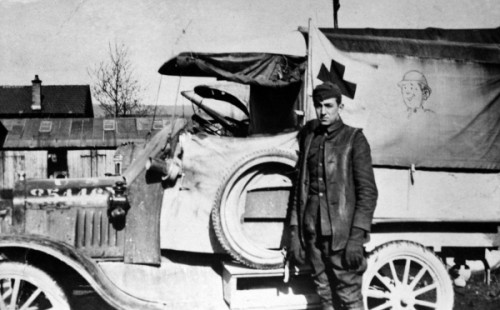 Here’s what David Lesjak added from a book he’s working on:

“As I mentioned in another post, I’m currently writing a monograph about Walt’s life covering the years 1918-1919. The book explores Walt’s time with the post office in Chicago and then his time as a volunteer driver with the Red Cross in France. Here’s some of the text from my book that related to the above pictured event: “The September 5, 1918, Racine Journal News reported the bomb, which had detonated at approximately 3:10 p.m., had “shattered every window on the first three floors of the two buildings across the street. The force of the blast tore the radiator from its fasteners and hurled it twenty feet into the street where it struck and killed a passing horse, smashed the desks, uprooted great slabs of marble from the walls and ground the woodwork into splinters. Flying debris cut into shreds several war posters and canvas banners stretched across the front entrance and filled the street with plaster, stone, and glass.”

Four people were killed and more than 75 others were injured as a result of the blast. The dead were letter carrier William Wheeler; clerk Edward Kolkow; 22-year old Navy recruit J. Ladd; and 19-year old Ella Mieblke, who just happened to be walking by the building when the explosion occurred. The horrific scene included a dead horse, mangled streetcar, and thousands of glass shards strewn about the surrounding area from the hundreds of shattered windows.

Disney said, “In fact, a mailman who worked just two desks away from me, he was on his way out and he got killed. We were locked up there until they made a thorough investigation. [They] wouldn’t let anybody out.”

Speculation was rampant in the press as to what actually happened. The Lincoln, Nebraska, Journal mistakenly reported the explosive “was hurled from across the street,” while the Mansfield News reported the bomb “was to have been exploded during the great Labor Day parade with the expectation that it would wipe out hundreds of lives.” The Mansfield News article went on to erroneously state, “The man who placed the bomb . . . is today reported under arrest.” Later reports indicated the bomb had been placed inside a suitcase behind a radiator.

Authorities initially believed the crime was committed by associates of Bill Haywood, the General Secretary Treasurer of the Industrial Workers of the World (IWW). The IWW was antagonistic towards the federal government and opposed America’s entry into World War I. Haywood was in the Federal Building at the time of the explosion, having recently been sentenced to 20 years in prison for “obstructing the government’s war program.” Haywood fled to Russia after being released on bail, where he remained until his death.

Despite the preliminary belief the bombing was related to Haywood being in the Federal Building at the time of the incident, no members Haywood’s organization were ever charged with the bombing. In a follow-up story, the December 24, 1918, New York Times reported Dominick Costerella, the alleged leader of the so-called “Black Hand” extortion group, which operated between Milwaukee and Chicago, was later accused by his wife with having been responsible for the Chicago blast, as well as another in Milwaukee that killed 10 people in a police station.”

(Thanks again to Leo and David. Here’s the original source material)