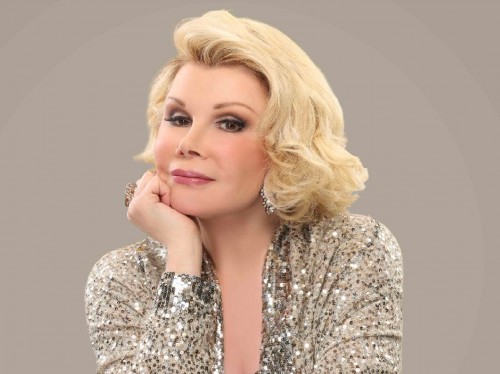 Was she a Disney legend? No, she isn’t absolutely known for one specific role in the world of Disney, but she did have quite a few credits with the Disney company. Her TV movie that she wrote, “The Girl Most Likely To…”, aired on ABC in the 1970’s, she guest starred on the ABC sitcom “Less Than Perfect,” she had a cameo in “Iron Man 3” and “The Muppets Take Manhattan” and was a constant source of hilarity on “The View” and “Jimmy Kimmel Live”.

Joan Rivers, who passed away today at 81 will be known as someone who changed the face of comedy with every joke, stand up set, and talk show appearance she made. From her glass ceiling shattering sets on the Ed Sullivan show back in the 60s, to her ground breaking Tonight Show guest spots, then her own late night talk show, to her resurgence in the new millennium, with her single-handedly creating the red carpet format and coining the term “Who are you wearing?!”

While she never covered the red carpet for ABC, she helped them realize that their own red carpet special prior to the Oscars was essential. She also was one of the first to make talk show conversations must-watch moments, bringing such light and humor to every show she appeared on.

I realize she isn’t known for Disney, but I felt like her passing had to be mentioned and mourned on the site. To my comedy role model and all around icon, from all of us at The Disney Blog, our thoughts are with Melissa, Cooper, and the whole Rivers family. Joan, we will miss you.

previousDisney’s Tri-Circle-D Ranch at Fort Wilderness is an overlooked gem
nextImagine a world without Walt Disney. How he narrowly escaped death on September 4, 1918