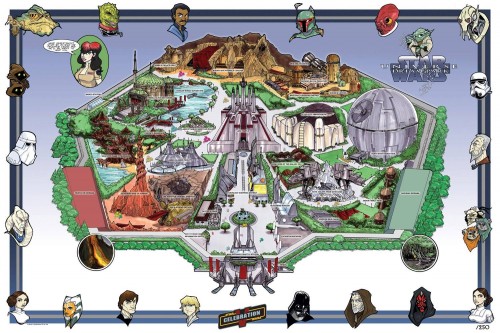 Featuring the tried and true hub and spoke model, the map of a Star Wars theme park looks familiar to Disneyland fans. There’s the Coruscant shopping district instead of Main Street, Kashyyk Family Treehouse instead of Swiss Family Treehouse, Chewie’s Barbeque instead of Bengal barbeque, etc.

It was licensed & made as a poster for the Star Wars Celebration V event that was held previously in Orlando.

This map has me dreaming of what Disney could build if they decided to open a 3rd gate in Anaheim or a 5th gate in Orlando. Would you like to visit a Star Wars theme park some day? What would you put in it?