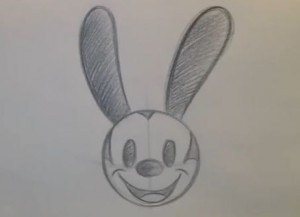 I visited Disney’s Hollywood Studios for years before I ever stepped foot in the learn to draw Animation Academy. It was a blast and I’ve been back frequently since then. What many guests don’t realize is that there is a second learn to draw opportunity at Walt Disney World. The lobby of Disney’s new Art of Animation Resort features Disney character artists who will teach you to draw a classic Disney character while you wait for your room or if you just want to hang out.

In the video below, Disney Character Artist Jason Zucker shows how simple it is to draw Walt Disney’s first real breakout animated character – Oswald the Lucky Rabbit. During the video Zucker also pass along a little knowledge about the interesting history of Oswald.

Without Oswald we wouldn’t have had Mickey Mouse and without Mickey we may not ever had had the rest of Walt’s magical gifts to enjoy.

1 thought on “Learn to Draw: Oswald the Lucky Rabbit”