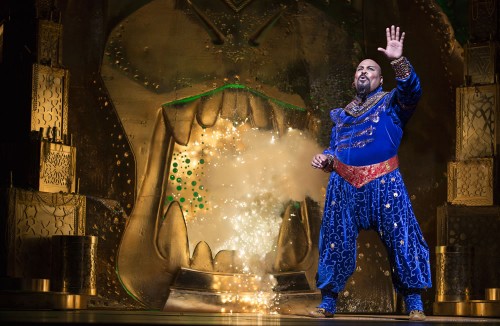 It was a special moment after curtain call at last night’s performance of Disney’s Aladdin the Musical on Broadway. Tony winner James M. Iglehart, who plays the Genie in the Broadway musical, came on stage to lead the audience in a tribute to the great genius that was Robin Williams. Williams, of course, originated the Genie in Disney’s animated feature Aladdin.

The audience all received a special handout with the words to “Friend Like Me” in their playbook for the evening. Iglehart then led the audience in a sing-a-long of the song:

Not a dry eye in the house, and not a dry eye at home either. There’s another video that gets more of Inglehart’s personal tribute to Williams at the beginning, but the footage isn’t as good.

Goodbye Robin. You made the world a better place and the rest of us will have to step up mightily to fill the gap.