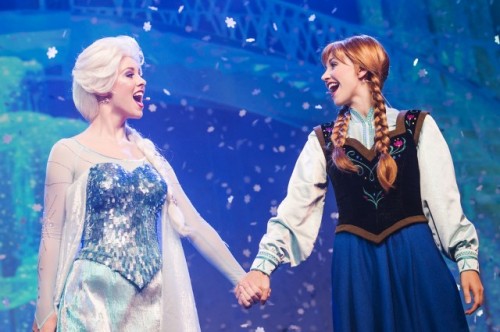 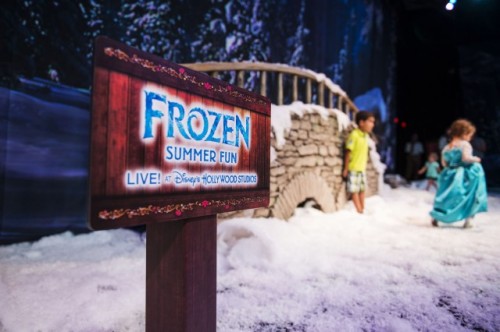 Here’s a rundown of what’s planned for park guests through Sept. 28, 2014 (schedule subject to change without notice):

“For The First Time in Forever: A ‘Frozen’ Sing-Along Celebration”: Inside the park’s Premiere Theater, Princess Anna and Queen Elsa join the Royal Historians of Arendelle for a fun and comedic retelling of the history of their kingdom amidst projections and special effects. Guests are invited to join in special sing-along moments from the film’s chart-topping soundtrack. At the end of the performance, guests become “Honorary Citizens of Arendelle.” The 30-minute show is presented multiple times each day.

Wandering Oaken’s Trading Post & Frozen Funland: There’s a “big summer blowout” happening inside the park’s Soundstage One, where Oaken – the film’s trading post owner – and his cousins have created the “Frozen Funland” amidst a winter wonderland. Living up to its name, there are plenty of frozen festivities inside the makeshift adventure park Oaken and his cousins built to make the most of the sudden snowstorm.

Part of Oaken’s Frozen Funland is an ice skating rink with demonstrations by some of Oaken’s talented cousins on the Arendelle ice.* For an additional fee, guests can don a pair of skates and hit the ice as well. Kids can enjoy frozen wintertime activities in the “Do You Want to Build a Snowman?” area. For all of his Frozen Funland friends, Oaken has plenty of merchandise at his Trading Post, along with hot cocoa and sweet treats available for purchase.

Guests also can take pictures with the film’s animated characters in a virtual setting, and then email them or share on their social media channels.

Coolest Summer Ever Dance Party: In the evening, a live band and DJ take the stage to celebrate “Frozen” summer fun with contemporary songs and a few familiar tunes from the film.

Take-Along Olaf: Guests have the chance to be a part of the celebration by hashtagging photos of themselves in the park with a “Take-Along Olaf.” Take-Along Olafs are distributed at various locations in the park. Guests are invited to carry Olaf with them on their Disney’s Hollywood Studios adventures. By sharing photos with the unique hashtag #OlafSummerVacation, their photos may appear on the main stage’s big screen during special moments throughout the day.

Frozen Fireworks: The giant Sorcerer Mickey Hat on Hollywood Boulevard gets the full “Frozen” treatment with special projections of snow and ice images in an eye-popping spectacular above Hollywood Boulevard. Set to the film’s soundtrack, the fireworks show features some special guests, including a very magical appearance from Elsa.

Remember, the fireworks show will be presented each night (except August 23) through September 1, and then on Fridays, Saturdays, and Sundays only from September 5-28.

You may also want to download and install the augmented reality app Aurasma as there are a few opportunities to get your photo taken with some special surprises while at Oaken’s Trading Post.

Have you visited the Frozen Summer Fun Live event at DHS yet? What did you think?