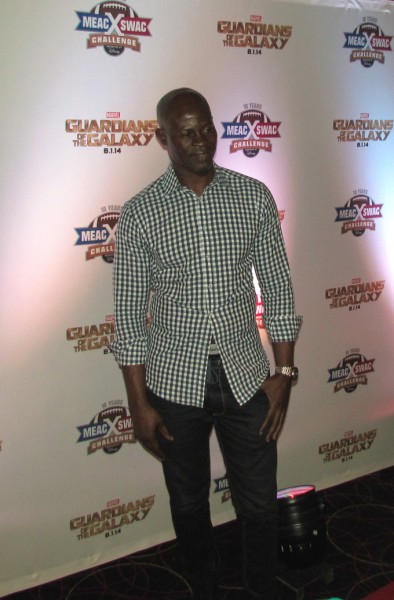 This year marks the 10th anniversary of the MEAC/SWAC Challenge presented by Disney. Each year two great football teams from southern, mostly black, colleges are invited to kick off the season in a special Football game here in Orlando. To help whet the local appetite, Disney brought in one of the stars of Marvel’s Guardians of the Galaxy for a red carpet interview and a special screening of the movie along with community members involved in the classic Orlando football game.

We sent our special “Disney Kid’s View” correspondent to the red carpet to meet Djimon Hounsou who plays Korath the Pursuer in the film. Hounsou was twice nominated for an academy award, and, as you can see in the interview, is very very nice.

Thanks to Indigo for doing the host duties. We’ll probably be seeing the film at least once more, if just to see the special end-credits tag that won’t be shown until the paying customers see the film.

Technically, that’s tonight for limited IMAX 3D engagements. IMAX 3D is pretty amazing, so do that if you can. If not, at least go see it this weekend and let us know what you think.

Previously: Whit shares his thoughts on Guardians of the Galaxy.