Downtown Disney is in the middle of a transformation that will see it change its name to Disney Springs and add additional dining and shopping options. The first major new area to open will be “The Landing” in 2015, but there is construction going on related to Disney Springs all over the district.

Here’s a video look at the progress of all the non-parking garage construction across Downtown Disney as of July 20, 2014;

Although it has been known by those who watch government filings and such, Disney finally made it official that the parking garage will be accessible directly via a freeway off ramp. The first of two multilevel parking garages will hold 4,000 parking spaces and is expected to open late this year. Access to Disney Springs will be aided by two pedestrian bridges direct from the garage to the shopping district.

The project also calls for Lake Buena Vista Drive to widen from seven to 10 lanes and constructing two multilevel garages (the first of which, pictured above, is set to open by late 2014 to offer 4,000 parking spaces). They’ve really made a lot progress as afar as the first garage goes. You can just see the final floor being worked on behind the AMC Theater entrance. 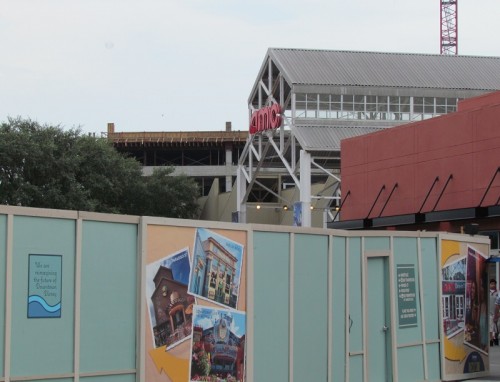 Have you visited Downtown Disney during the construction? What did you think about all the walls and the parking situation?

previousPirates of the Caribbean V Announced by Disney
nextThe Muppets to take Broadway?